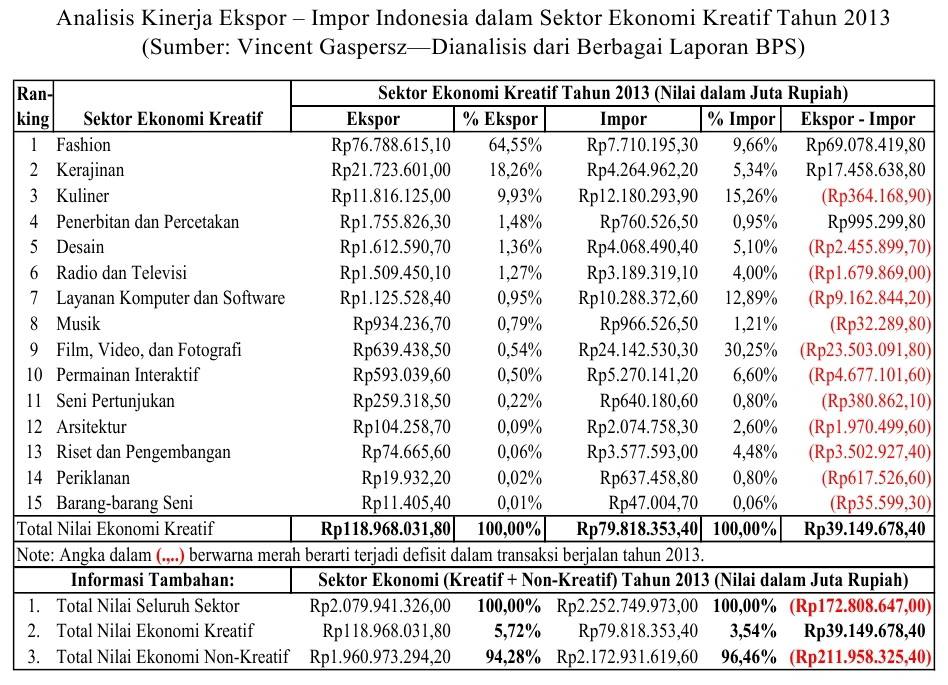 “In God we trust; all others must bring data.”

The analysis result above shows that Indonesia should heavily FOCUS on Fashion and Crafts sectors, because both of these sectors have contributed about 80% to the Creative Economy Exports. Furthermore, another strategy is to reduce imports of creative products that have caused huge trading deficit like: film, video, photography, computer services, and software, through developing the domestic capabilities.

With regard to data validity, I “MUST” believe to the official BPS/Central Agency on Statistics institution that nationally publishes data. According to my belief, if related to exports and imports data, BPS’ data are usually valid because the official in- and out-flows of goods would be reported to BPS (except for the smuggled goods). The problem of BPS is NOT with the data collection, BUT if it’s related to government policy like poverty indicators, etc., which have been adapted to irrational poverty lines that do not fit the real world’s reality. For that reason, if related to poverty, I usually use comparative indicators from World Bank.

“In God we trust; all others must bring data.”

Father of Total Quality Management and was highly respected in Japan, because Dr. Deming guided Japan to advance in quality control after the defeat in Second World War in 1945.

In 1891, an English physicist, Lord Kelvin, wrote:Pada tahun 1891, ahli ilmu fisika Inggris Lord Kelvin menulis: “BWhen you can measure what you are speaking about, and express it in numbers, you know something about it, when you cannot express it in numbers, your knowledge is of a meager and unsatisfactory kind; it may be the beginning of knowledge, but you have scarely, in your thoughts advanced to the stage of science.”.

Other expressions related to measurement are:

Based on above commentary, then it appears how important it is to collect facts, analyze them, BEFORE making strategic decisions in order to increase Indonesians’ welfare. That is exactly the nature of Management and Systems knowledge.