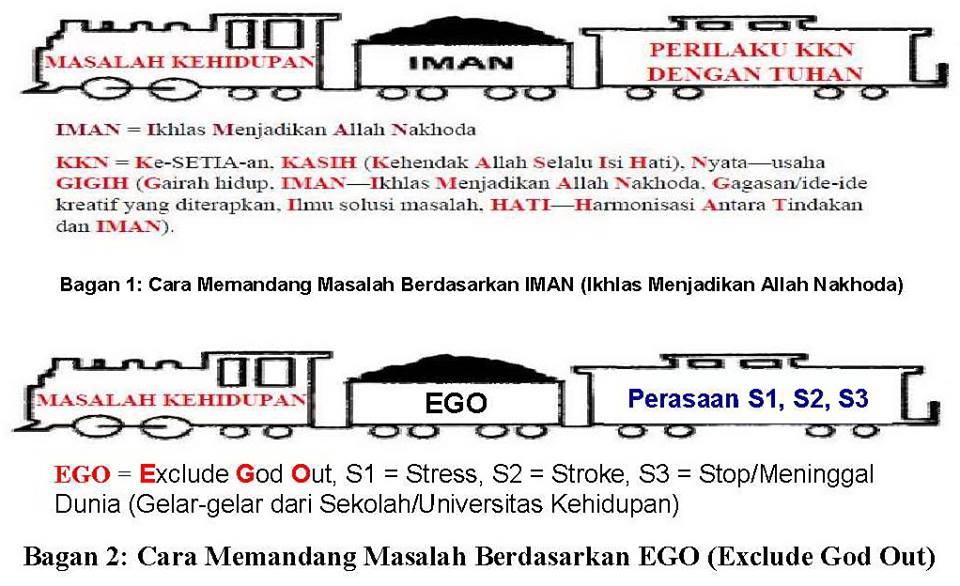 Life issues always exist as long as humans live in this world and they apply to everybody, whether those who believe or do not believe in God (ATHEIST). In the attached picture of trains, it is illustrated that PROBLEMS locomotive is always moving all the time. Occasionally, the train will enter a long dark tunnel (a big problem that happens for a long time) or short dark tunnel (a small problem that happens shortly), and the railroad tracks with various situations and conditions.

If PROBLEM happens, everybody, whether those who believe or do not believe in God, MUST try to do PROBLEM SOLVING. Differences happens when that PROBLEM SOLVING is UNSATISFACTORY or THE PROBLEM CAN’T BE solved at all.

An ATHEIST or someone who don’t fully believe in God always relies on EGO (Exclude God Out), so that every form of FAILURE will DEFINITELY be addressed with different expressions, starting from complaining, hating others, blaming others and the environment, not having desire to live, STRESSing (S1), having STROKE (S2), and eventually STOPping (S3) or dead. VG, when he was an ATHEIST who relied very much on EGO, when experienced STRESS (S1) always asked his wife, who is a doctor, to give him sedatives, sleeping pills, antidepressants, and he even had consultated with a psychiatrist. Everyday he was emotional and angry to his family, etc., which CAUSED unsolved problems, BUT also caused new problems like conflicts with the family members, other people, etc. Ultimately, an ATHEIST’s outlook which solely relies on EGO in SOLVING PROBLEMS would cause various NEGATIVE feelings and actions that come from the NEGATIVE PERSPECTIVE of looking at PROBLEMS.

Someone who is ber-IMAN/Faithful (Ikhlas Menjadikan Allah Nakhoda/Sincerely Making God The Helmsman) always acts POSITIVELY in facing LIFE PROBLEMS. Indeed real efforts like G.I.G.I.H./Persistence (Gairah/Passion, IMAN/Faith – Ikhlas Menjadikan Allah Nakhoda/Sincerely Making God The Helmsman, Gagasan/ide-ide kreatif/Notion/creative ideas, Ilmu solusi masalah/Problem solving ability, HATI/Heart – Harmonisasi Antara Tindakan dan IMAN/Harmony Between Action and Faith) MUST STILL BE done. However, the Perspective and Action in facing LIFE PROBLEMS, now with POSITIVITY, is that God (Allah) is testing Faithfulness and KASIH/Love (Kehendak Allah Selalu Isi Hati/God’s Will Always Fulfills Heart), so that the wisest course of action is to be Sincere in the context of TAAT/Obedience. Since we have had God whi CAN do things that I CANNOT and we have allowed God to prove His Reliability, then we can keep going day by day with excitement and HAPPINESS although we are still in a PROBLEM that we believe will DEFINITELY be solved by God at the RIGHT time.

GOD’s secret experienced by VG is when we are still COMPLAINING then GOD will extend or increase the weight of the PROBLEM until eventually GOD will take action after we have been 100% IKHLAS/Sincere. GOD is CONSISTENT with PROMISE and demands our COMMITMENT, so that if we have BELIEVED that: TUHAN itu KONSISTEN dengan JANJI dan menuntut KOMITMEN kita, sehingga apabila kita telah MEYAKINI bahwa: “It is better to trust in the LORD than to put confidence in man” (Psalm 118:8), then THIS MUST BE CONSISTENTLY implemented by us!

Test from GOD through PROBLEM is always related with Loyalty and KASIH/Love (Kehendak Allah Selalu Isi Hati/God’s Will Always Fulfills Heart), because the main law taught by Jesus is:

Many people claim to believe in GOD often FAILS in facing this test of Loyalty and KASIH/Love (Kehendak Allah Selalu Isi Hati/God’s Will Always Fulfills Heart).

Best Regards for SUCCESS with GOD.