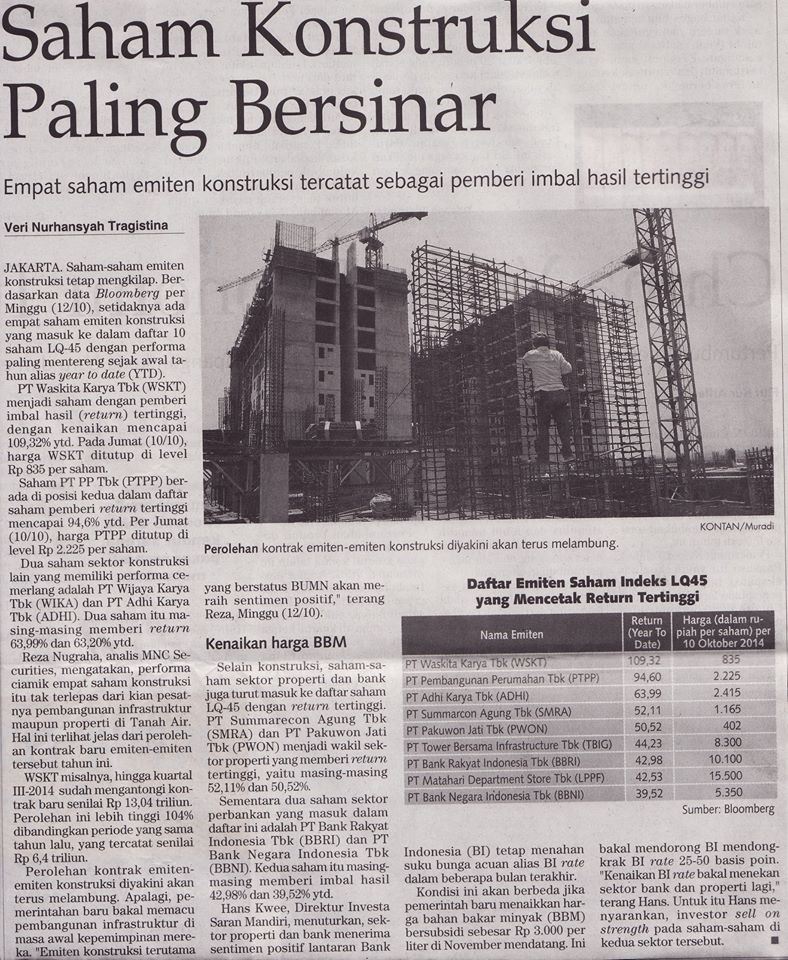 What a pleasure it was for those who collected Waskita Karya and PT Pembangunan Perumahan stocks, in a year your wealth has gone up twice as much! Congratulations to the stock investment workshop participants a year ago (October 2013) who I recommended to buy BBRI (Bank Rakyat Indonesia) stock when its price was Rp 7,000/share at that time, your wealth has also gone up by 43%. Keep using the buy-sell strategy using the staircase model created by Vincent Gaspersz.

The staircase method is applied for planned buying and selling of stocks, NOT panic selling or speculation. It is based on buying superior stocks using stock analysis based on fundamental analysis obtainable from company’s financial report.

Planned buying is done when stock prices are down, usually when the speculative stock players are doing panic selling. PRECISELY that is the time we plan to do several buys on a particular stock. For example, we would buy BRI stock (Ticker symbol: BBRI), and with our investment capital of 100%. The buys would be done 6 times, with the criteria of buying allocation of for example, as follow:

The second buying criterion for example would be applied when the stock price has decreased 2% from the first initially bought price, and so on every decrease of 2%. This criterion is personally set.

After using all 100% of the investment capital, then we’ll just wait until one day the stock prices would start to increase. The selling criteria is also personally set based on our expectation, for example, will be sold after price has increased by 5% or 10% from the bought price on every order or those buys. When buying a stock, write down the buying date, buying price, number of lots/units, and other relevant information for example, the significant event happened in the stock market, all in an Excel document.

Further explanation can be seen in buying share instructions.

This method is for short-term investment and to obtain short-term profits in a very fluctuating market condition. This method can be easily applied by anybody to avoid panic selling or speculative action. However, for a long-term investment, just keep the stocks until 20-30 years. The key is in deciding which stocks that must be bought. That is financial analysis that can be learned on one’s own.

I have proven for 5 years investing in stoks and my target is not that much; ROI = 30% per year is Good enough for me. My investment portfolio in stocks is not as big either only 25% vs. 75% in Condotel. But, it is decent, if investing Rp 10 Billions with 30% average returns annually, it’s equivalent to receiving Rp 3 Billions per year or around Rp 250 millions/month. This is the same as the salary of a President Director at a big company. It’s true that playing stocks will only feel good if the investment capital beyond Rp 1 Billions.

In an UNSTABLE market, the probability to reap profits is very high. In the real world, practice is more important than just theory. I can show an example, if there was a university graduate who has just graduated with his/her first degree, and then I gave him/her a capital of Rp 100 Millions and just taught him/her to play stocks with DISCIPLINE and targetting just ROI of 20%/year. How much would he/she make when he/she would be 55 years old or for 30 years of playing stocks? The following Future Value table shows that his/her money would be: about Rp 24 Billions by the time he/she reaches 55 years of age. What if I instead gave that young person at 25 years old a capital of Rp 1 Billions to play stocks? By 55 years old or 30 years later, he/she would have Rp 237 Billions. Whatever the reason, say if he/she currently worked with initial salary of Rp 5 – 10 millions/month, would it be possible for him/her to get as much money as in that table? Best Regards for SUCCESSUL Entrepreneuring Towards Financial Freedom: Get Rich Quick Strategy Without Having to Work. This topic will be discussed on October 16, 2014, in Kupang.