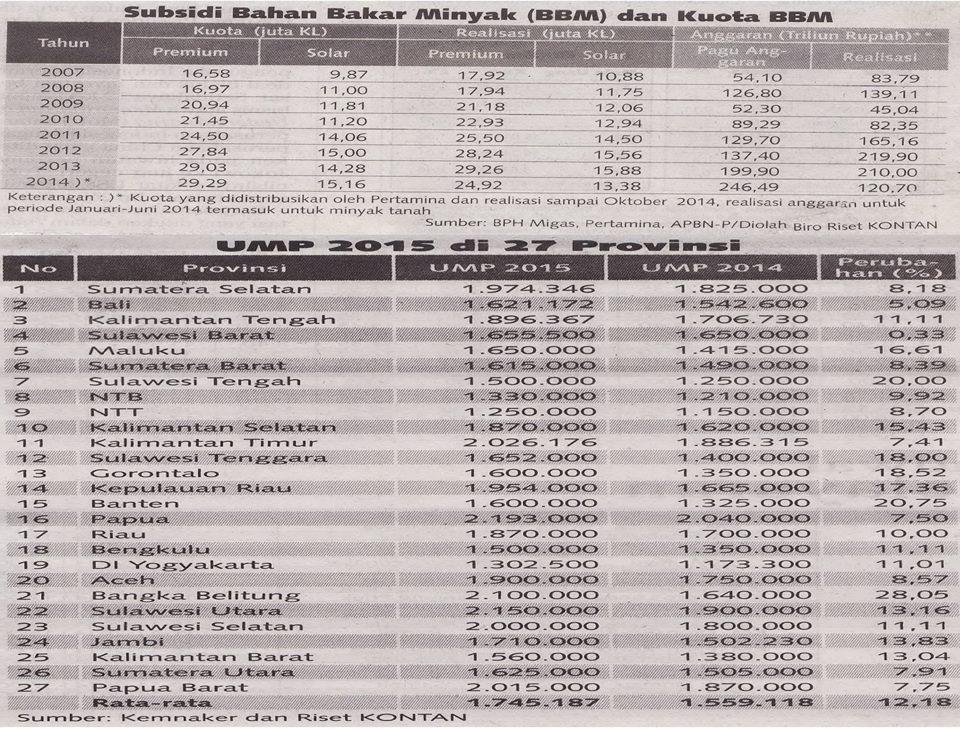 Is Increasing Fuel Oil Price A Way Out for Indonesia’s Current Economic Problem?

The pros and cons of fuel oil price increase ONLY look at it from simple reasons, NOT from the macroeconomic context. If we ONLY look the black-and-white of increasing fuel oil price is to reduce fuel oil subsidy, then the result of that subsidy reduction would ONLY be shared to the poor with the subsequent budget allocation for just ROUTINE activities, then the empirical experience from the failure of former President SBY would repeat itself.

In 2008-2009, former President SBY had done the same thing, which was to increase fuel oil price and the budget for fuel oil subsidy indeed was reduced SIGNIFICANTLY from Rp 139.11 Trillions (2008) to Rp 45.04 Trillions (2009). But what happened next in these years of 2010-2014? Actually, the subsidy reduction was only implemented for one year. Furthermore, the subsidy budget continuously increased as seen in the attached picture. If so, the reasons of those who are in the CON side to increase fuel price in order to reduce fuel oil SUBSIDY would be LOGICAL and ACCEPTABLE.

But, if the mechanism of increasing fuel oil price would be used as an “entry point” to TOTALLY fix Indonesia’s Macroeconomic SYSTEM, then all parties would receive the consequence of that fuel oil price increase.

As reported based on the world oil price that is decreasing, then actually the PREMIUM (fuel oil) economic price would be around Rp 8,700-ish per liter, then the proposal of those that states the SUFFICIENT premium fuel price increase to be Rp 2,000/liter has been LOGICAL because it has approached the economic (market) price of that premium, which is about Rp 8,500/liter; thus, PREMIUM subsidy per liter would ONLY be around Rp 200-ish. BUT, this too is ONLY a short-term SOULTION.

The solution I’m proposing is as follows:

Therefore, the exit is NOT just about Pros or Cons of increasing fuel oil price, BUT what would be the next step(s) after that? If the disease comes from the INCORRECT ECONOMIC SYSTEM, then the exit too MUST be based on SYSTEMIC approach, NOT just a partial approach for some particular elements within that system.