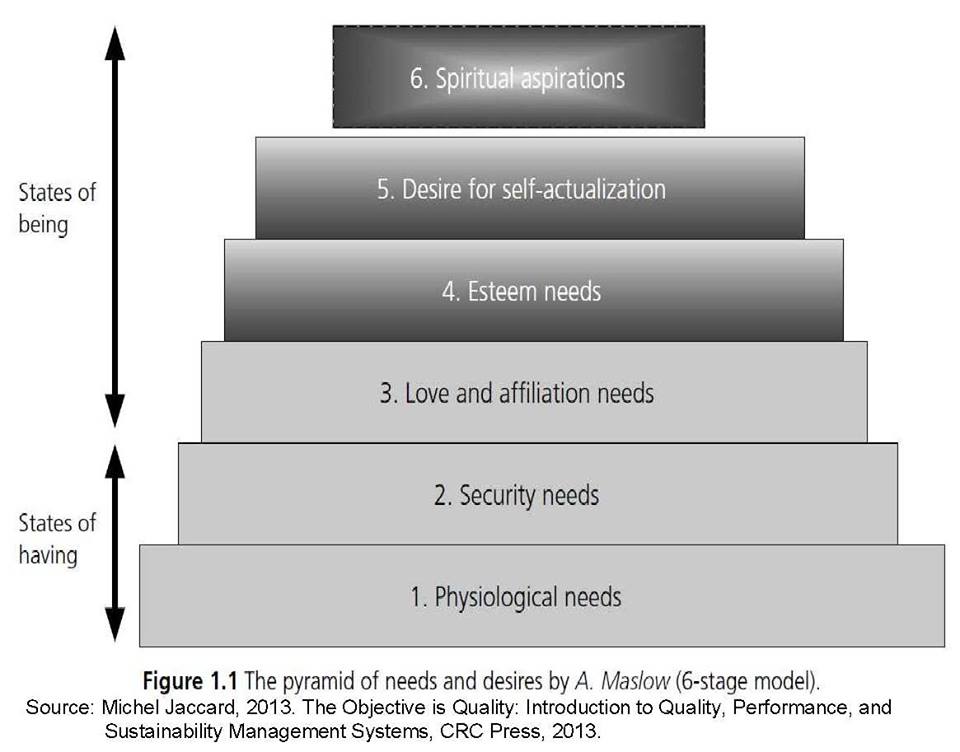 When we talk about the importance of understanding the spiritual aspect (not Religion) that sets the relationship between humans and God (The Creator) in building Quality Systems Management, or what is often called Total Quality Management (TQM) since 10 years ago (2005) in Indonesia; many people laught at or be cynical and regard it as IRRELEVANT to connect the knowledge of management system with spiritual aspect! I received many POSITIVE and NEGATIVE responses when I gave lectures in Master’s of Management and Doctor of Management postgraduate programs in Indonesia.

I have strongly believed, since 1988 when I was studying TQM for the first time in doctoral program of Systems Engineering and Industrial Management at ITB ( Institut Teknologi Bandung/Bandung Institute of Technology), that TQM, if it’s well and correctly understood would be the knowledge that is one level below biblical knowledge (The Bible, Al Qur’an, etc.) BECAUSE TQM sets the relationship between people in order to reach the level of mutual satisfaction, which is referred to as Customer Satisfaction. I have believed, ever since that moment, that eventually based on the development of science and technology, TQM would CERTAINLY include a spiritual aspect that sets the relationship between humans and God (The Creator). That belief is increasing especially when Stephen Covey, who is famous for his Seven Habits of Highly Effective People book, adds spiritual aspect in his book entitled: The 8th Habit.

In the end, my belief becomes a reality with the emergence of the newest TQM book written by Michel Jaccard entitled: The Objective is Quality: Introduction to Quality, Performance and Sustainability Management Systems, CRC Press (2013). In that TQM book is explained about Maslow’s Six Hierarchy of Needs by adding spiritual aspect as the highest need of humans. If previously in Maslow’s theory, it was only mentioned five basic needs of humans with Self Actualization as the highest need, then in the latest TQM theory, Maslow’s hierarchy of needs has been turned into six levels with Spiritual Aspirations as the highest level of need as seen in the attached picture.

The TQM book that is alluded above can be freely downloaded here:
http://gen.lib.rus.ec/search.php?req=michel%20jaccard&lg_topic=libgen&open=0&view=simple&phrase=1&column=def

“Science without religion is lame, religion without science is blind“

Note: religion or iman/faith is turned into acronym of IMAN/Faith = Ikhlas Menjadikan Allah Nakhoda/Sincerely Making God The Helmsman by VG.

I am also still continuously learning because this spiritual aspect is the most difficult to be embraced by a scientist knowing that it relates to something abstract; thus, it only needs total devotion. Saya juga masih belajar terus-menerus karena aspek spiritual ini yang paling sulit diterima seorang ilmuwan mengingat berhubungan dengan sesuatu yang abstrak sehingga hanya membutuhkan ke-TAAT-an total. IMAN/Faith = Ikhlas Menjadikan Allah Nakhoda/Sincerely Making God The Helmsman is easy to be said BUT is difficult to be implemented! But in a situation where all means HAVE met dead end, then by ONLY hoping to God and entering ZERO POINT without having to do any action, we would be given the way out beyond our logic and mind as humans.

It is not easy to accept the diversity of religious beliefs! My way is to find the equivalences in those beliefs’ spiritual values and to respect the differences that exist as a fact of diversity.

The following presentation material has included spiritual aspect for improving the healthcare quality conducted by scientists and doctors.
https://smhs.gwu.edu/staticfile/SMHS/Graduate%20Medical%20Education/Feb%202011%20Spirituality%20in%20Medicine.pdf

A more in-depth explanation for understanding Maslow’s hierarchy can be seen here:
http://personalityspirituality.net/articles/the-hierarchy-of-human-needs-maslows-model-of-motivation/

Perhaps my following comprehension is mistaken or wrong, but based on the Maslow’s theory explanation above would it be possible for someone who HAS NOT YET satisfied his/her basic needs STILL have the energy to think about spirituality (intimate relationship with God)? The answer is perhaps yer, BUT the probability for such thing would be very small!

Note: The rich who still have made money (Rp, $, Euro, etc.) as their main purpose and continuously focus on the wealth accumulation by any means necessary including by doing corruptions, doing scams, exploiting the poor or exploiting others, etc., are still considered to still be at the lowest level of hierarchy because their physiological needs (in this case, the need for money) HAS NOT BEEN YET satisfied/fulfilled!

The comprehension about the spiritual needs in Maslow’s theory here IS NOT like what many comprehend, which as long as is to just do religious activities; because people may do religious activities, BUT some can also actually be unfaithful that would appear from their everyday behaviors that constantly violate God’s commands or Word.

Therefore, many people start questioning the success of the dissemination of religions’ teachings to do good (to follow God’s Word) in Indonesia, because it is unable to change human behavior towards the essential understanding of spiritual needs, which is to have one word/unity between the mind (what is thought), the word (what is said), and the action (what is done); all, which are summarized by VG into an acronym of HATI/Heart (Harmonisasi Antara Tindakan dan IMAN/Harmony Between Action and Faith).

I am currently doing a small “experiment” involving some people (including my second son) by stating that if you follow God’s commands according to your belief, then try to do Superconscious Mind approach in order to reach ZERO POINT for 40 days; then through IMAN/Faith, within 40 days, your most intrinsic wish (whatever it may be) would be granted by God. Why 40 days? There is no right answer on the amount of days (it may vary), but what is expected here is to utilize the effect of repetition). I personally did the experiment independently to reach ZERO POINT (by preparing special time to FOCUS solely on God) for 1,600 continuous hours (only took breaks just to eat, shower, and sleep) before receiving positive impact from the repetitious FOCUS to God.

If we want to prove this with the main purpose of increasing our FAITH, then write the wish for that essential need on day 0 (before starting the 40 days program), so that if it is granted by God, then it WOULDN’T be regarded as a mere coincidence!

Note: for 40 days of SOLE FOCUS on God, NOT on the personal interests (that wish), because if we only focus on what we ask (personal interests) then our IMAN/Faith is equivalent to a street BEGGAR’s who ONLY focuses on the money received, NOT on who gave that money!

What would be the result after those 40 days? For those whose Faith had just grown, then their wishes would ALWAYS be granted by God. My second son, whose Faith had also just grown, ONLY needed 4 days (4th day of the 40 days program) for his wish to HAD been granted by God, which was to receive “Letter of Offer/Acceptance” from an AACSB accredited Foreign University. Hiw wish to continue his study abroad was written by my second son on day 0, which was the day before starting the 40 days program of FOCUSING on God.

Self-transcendence related to spiritual values was added by Abraham Maslow himself before his death on June 8th, 1970. This is similar with the late Stephen Covey who added the 8th habit of highly effective people, which is Spirituality, in his book before he died.
The following links can explain further about hierarchy of human’s needs according to Abraham Maslow (1 April 1908 – 8 Juni 1970).

Perhaps it is STRANGE if the development of knowledge since its inception in USA can take about 30 – 40 years before being recognized in Indonesia. Especially if that knowledge hasn’t been taught in Indonesian universities, oftentimes it is considered nonexistent. Just look at Six Sigma concept, which was intially developed in 1986, implemented on Motorola Company and SUCCESSFULLY popularized by General Electric in 1990s, even today, universities in Indonesia still haven’t fully understood what six sigma is and how its correct application should be.

The problem is that spiritual aspect is also often associated with religions and it seems God, the Creator, or whatever its name, can only be approached through religious dogma. With the development of quantum physics science and zero mind process concept, the the approach to find God can really be explained scientifically. Now, there have been many Western scientists who scientifically discuss spiritual concept.

This textbook about Holistic Learning and Spirituality in Education explains how the Spirituality APPLICATION in learning. In this book, Spirituality HAS become a knowledge that can be rationally understood and discussed by scientists from all over the world. A reference for teachers/lecturers.
http://gen.lib.rus.ec/book/index.php?md5=7A140C59F3F14067A205E238531BDF4C

But, how is the actual practice? CORRUPTION reigns supreme, BUT CORRUPTORS still worship dilligently! CORRUPTORS are more afraid to law enforcement people (police, prosecutors, KPK), BUT are not AFRAID to God (Allah). In my opinion, it should be simple, we DON’T NEED to polarize the East and West approaches, just take the best out of all of them, then make your own CONCEPT about God (Allah); just apply HabluminAllah + Habluminnanas + Habluminalam for Muslims and the law of KASIH/Love (Kehendak Allah Selalu Isi Hati/God’s Will Always Fulfills This Heart) for Christians. I will explain further about how the always growing and always developed rational approach in finding God (Allah) through IMAN/Faith (Ikhlas Menjadikan Allah Nakhoda/Sincerely Making God The Helmsman). I personally approach spiritual world through Superconscious Mind (Dialoguing with God) and applying Zero Mind Process concept which I will explain next.

Even the Devil asks for retirement from Indonesia because the Government Officials/Corruptors have been more skillful than the Devil, so that it would be more “challenging” and interesting if the Devil works in developed nations with almost ZERO corruption level (clean government).

BUT, if the SPIRITUAL values are not well understood, whether through self-finding (self-transcendence) or through various forms of religious study, then the right mindset will Not be well-shaped either. If the mindset is not well-formed, then automatically so is the ATTITUDE. Furthermore, Bad Habits that are continuously applied will create a Character of a cheater/liar/thief/corruptor, etc., which essentially is to violate all God’s commands. This repeated process in the motivational theory is called NEGATIVE REINFORCEMENT, which means someone who obtains earthly PLEASURES through repeating BAD/NEGATIVE actions. Conversely, if someone obtains PLEASURE through repeating POSITIVE actions, POSITIVE REINFORCEMENT would happen, so that the application of SPIRITUAL values would bring HAPPINESS not only later in the afterlife BUT immediately to be enjoyed in this world.

Note: According to the theory, less than 2% of human population would be ABLE to reach this Self-Transcendence (the highest hierarchical level in Maslow’s theory).

The attached article by Prof. Komarudin is good to be read and will also help understanding my question above.