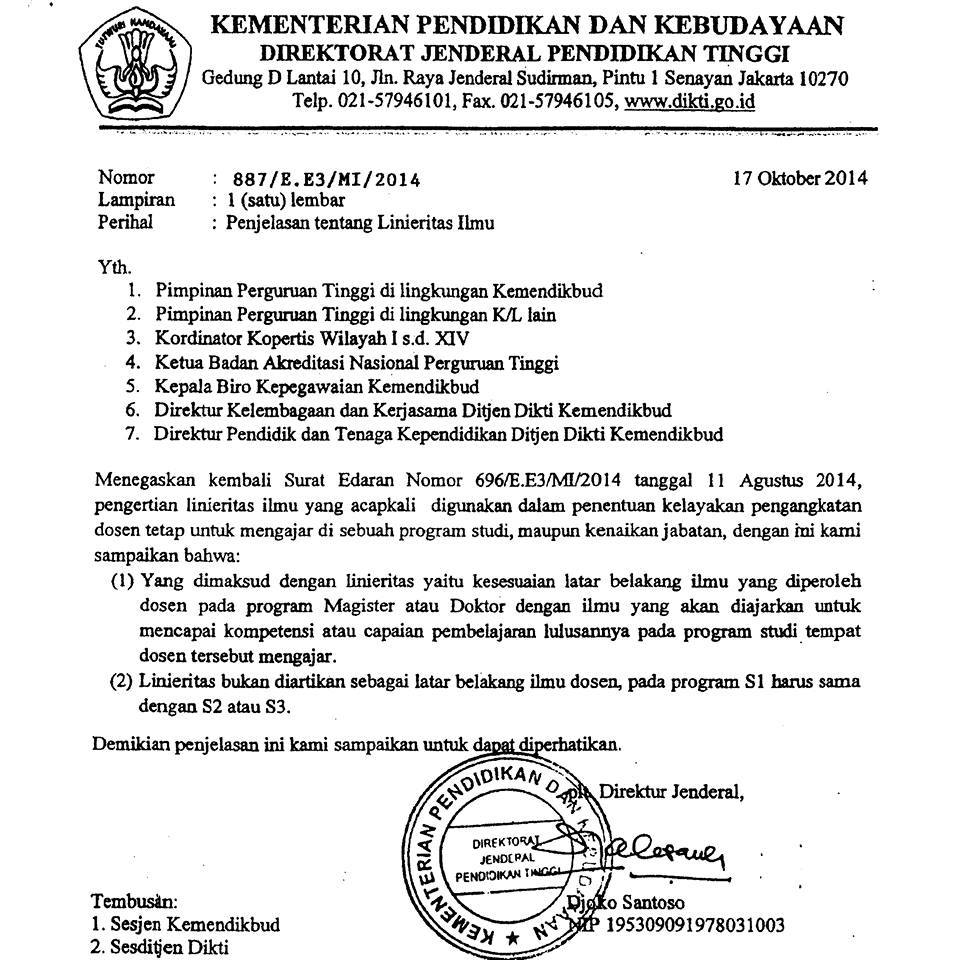 Misguided, But Stubbornly Consider The Opinions of Higher Education Management (Head of Study Program, Dean, Rector) to be True in Indonesia!

I often smiled inwardly when there was someone in an university, which its leaders STILL revealed the following statement: “Too bad, Prof. VG DOESN’T have linearity knowledge; thus, CANNOT be recognized when teaching in University’s Master of Management Program”. It turns out, opinion like this is also reinforced by Study Program Accreditation Assessment Team in Faculties/Universities. It seems that the understanding to read and to interpret a rule in Indonesia is STILL SEVERE!

As a case, on me personally:

If there are people who are STILL stubborn with the wrong opinion about Linearity Studies since undergraduate, then please read the attached circular letter from Director General of Higher Education on October 17, 2014, so that you NO longer defend that mistaken opinion.

Logically, if the interpretation of the fields of undergraduate, postgraduate, and doctorate ought to be the same, then it would NOT be possible that my Professor Decree in the field of Managerial Economics at the Faculty of Economics would be issued by Minister of National Education in 2002. How could Professor Decree in the field of Managerial Economics NOT have the authority to teach managerial economics than those who graduated from undergraduate Economics, postgraduate Economics, and doctorate Economics? But that is Indonesia, up-to-whoever interpretation WITHOUT understanding and reading the existing written rule.

Circular letter from Director General of Higher Education dated August 11, 2014, HAS also explained clear matters about linearity knowledge. HOWEVER, that August 11, 2014, circular letter has not YET been well understood, so that another even CLEARER circular letter dated October 17, 2014, was published again. YET, that is the FACT that has developed until now, which is: up-to-whoever interpretation according to personal taste WITHOUT understanding (or deliberately NOT WANTING to understand: Fail to Understand) the terms of that linearity knowledge.