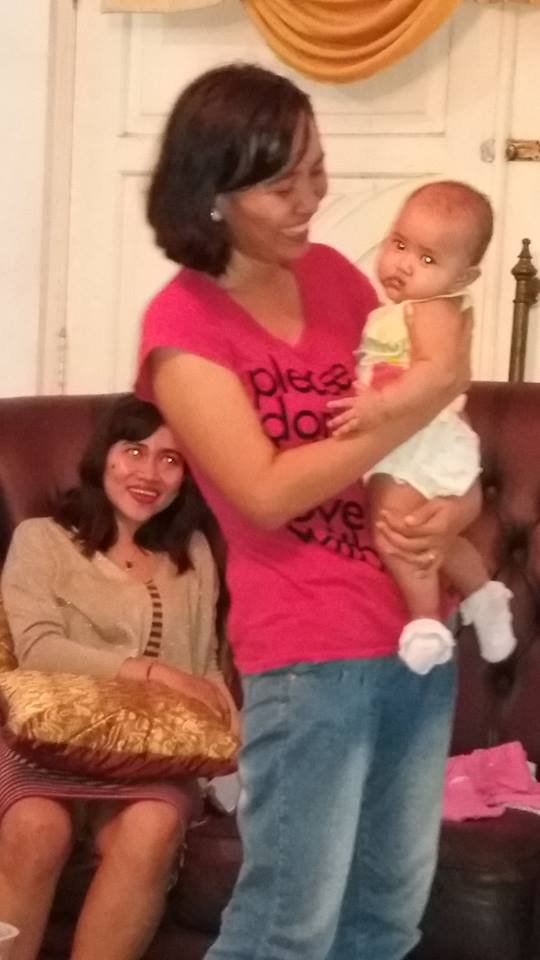 Reading the above title, of course we will ask how is it possible that Mujizat Penyembuhan Ilahi (MPI) // Divine Healing Miracle CAN happen to people who don’t believe that miracles will happen? BUT that was THE FACT that happened in my house in Bogor yesterday, on Saturday, October 15, 2016 at 4pm. This story shows that God has the PREROGATIVE RIGHT and for the fun of it in giving miracle to whoever He wishes, whether to a believer; a skeptic who says he/she believes (a Hypocrite); or somone who HONESTLY states he/she does not believe in God! Even a HYPOCRITE (with lukewarm FAITH) can obtain Miracle, let alone someone who HONESTLY states he/she believes 100% (with FAITH hot like burning fire) or 0% (100% Does Not Believe, with Faith frozen like ice) in God. Is not it written in the Bible: “I know your deeds, that you are neither cold nor hot. I wish you were either one or the other! So, because you are lukewarm—neither hot nor cold—I am about to spit you out of my mouth” (Revelation 3:15-16).

This story begins when, on September 18, 2016, a Mother named F (the initial of her real name), sent a mail to my inbox, which is essentially as follows:

Sir, I am F (a mother who is distressed); I know your Facebook contact from Dr. Mervin’s FB who testified about his son. Sir, I really want to come to your house and share the experience about healing. Because my daughter has a history like Dr. Mervin’s son. Her ears are troubled, sir. Now she has been 4.5 months old, but she is not especially clever yet to babble and she doesn’t respond to voices, sir. The doctor advised me to get BREA test. Sir, I am a mother who is willing to do anything for her daugther. I really want to meet you. I beg you to please help me.

Note: Mrs. F comes from Brebes, Central Java, who read the testimony of Dr. Mervin Tri Hadianto, Child Specialist; he posted the healing testimony of his son on Facebook:

Obtaining such information as the above, I immediately asked my friend, Jesus (John 15: 15-17), if He WOULD WANT to heal this Mrs. F’s daughter? Jesus’ answer was VERY surprising: order her to come to Bogor and the miracle process will take place GREATLY for the people who HONESTLY state that they DO NOT BELIEVE that Divine Healing Miracle will happen!!

As what has become the standard procedure, then I sent the prayer of family tree healing to be read and prayed for Nine consecutive days. After that I told Mrs. F and her daughter to come to Bogor on Saturday, October 15, 2016 at 3pm afternoon.

Mrs. F with a hesitant FAITH brought her 4.5 month old DEAF daughter, her sister who DID NOT BELIEVE that Miracle would happen, plus her husband and her biological mother that regarded it would be futile to go to Bogor because how could a Miracle would happen for the deaf (whereas even the ENT specialist and the shaman who had been visited were UNABLE to cure). Although Mrs. F’s sister DID NOT BELIEVE in Miracles, she was willing to take her sister by driving the car from Brebes to Bogor. They departed on Friday, October 14, 2016. They arrived about 3:30 pm at my house in Bogor, although their journey experienced many obstacles such as their car was grazed by another car so that they had to deal with the person who crashed into their car, the fussy daughter (who was constantly crying due to being exhausted and hungry, etc.). They just had lunch at that 3:00pm for fear of arriving late in Bogor.

Upon arriving at 3:30pm, I asked my wife to talk to them all and to tell our spiritual experience in Vancouver, Canada, when we met Jesus and He asked us to return to Indonesia to await further assignment! After chatting about 30 minutes, my wife went to the second floor to see me and told me that they had come up with various problematic backgrounds in the family. At the same time I HAD known that her 4.5 months old daughter HAD BEEN healed by God.

I met with Mrs. F and her daughter and sister, and directly told them that IT IS OKAY YOU DO NOT BELIEVE THAT MIRACLE WOULD HAPPEN, BECAUSE I BACK THEN ALSO DID NOT TRUST GOD (AN ATHEIST). BUT your honesty that has FAITH like freezing ice is appreciated by GOD and now your daughter has BEEN able to hear! Please call her name! After my wife clapped her hands and called the name of the daughter, then she immediately turned around and laughed. Then Mrs. F also called her name and she also turned around. Then I told Mrs. F’s sister, who DID NOT BELIEVE that miracle would happen, to hold that deaf daughter who had been recently able to hear to test her hearing around the living room. After that they movingly cried because GOD has healed the deaf baby. I stated that: I did not do anything, did not hold or touch the ear, nor prayed, BECAUSE I had already known that your daughter had HEALED when entering my home!

Then they were interested, how could it be that simple? Then I told that I HAD asked my friend, Jesus (John 15: 15-17) before inviting you from Brebes to Bogor. Furthermore, for nearly 90 minutes, I explained the PROCESS how for John 15: 7-8 to be able to happen. If you remain in me and my words remain in you, ask whatever you wish, and it will be done for you. This is to my Father’s glory, that you bear much fruit, showing yourselves to be my disciples (John 15: 7-8). Bottom line is you abide in God as Psalm 118: 8 (It is better to take refuge in the Lord than to trust in humans.) and follow all the Words like: 2 Timothy 1: 7; Titus 2: 7; and James 4:17 and Proverbs 13:13. Furthermore, I say that you can also earn Money Miracle from GOD in order to become a rich person who is blessed like Solomon (Prophet Solomon) by applying the Word of God in Proverbs 11:24 (One person gives freely, yet gains even more; another withholds unduly, but comes to poverty) and Proverbs 19:17 (Whoever is kind to the poor lends to the Lord, and he will reward them for what they have done). Then Mrs. F chimed in how could you know my thoughts? My answer: what else does the human mind in the world want if it is not Wealth and Life?

The Event of Miracle that happens for those who DO NOT BELIEVE above, reinforces my statement more and more that:

Expressing doubts with sincere and honest heart is often a first step towards a close relationship with GOD. Therefore, rather than facing the feelings of doubts and worries, it is better to express them openly with clean and honest heart and to ask the guidance of the Holy Spirit to improve own faith and trust; than to be hyprocritical, which seems to believe in God, but within the deepest subconscious still has doubts about God’s faithfulness.

Thanks to Dr. Mervin Tri Hadianto, Child Specialist who has “Dared to be EMBARASSED” to post the testimony on Facebook about his son who was deaf and healed by God, so that fruitfully resulted in people who DO NOT BELIEVE to also obtain the same miracle from GOD. The IMAN (Ikhlas Menjadikan Allah Nakhoda) // FAITH (Sincerely Making God the Helmsman) of those who DID NOT BELIEVE will DRAMATICALLY increase after directly receiving those miracles from God!

Best Regards for SUCCESS. God Bless you all. Happy Sunday.