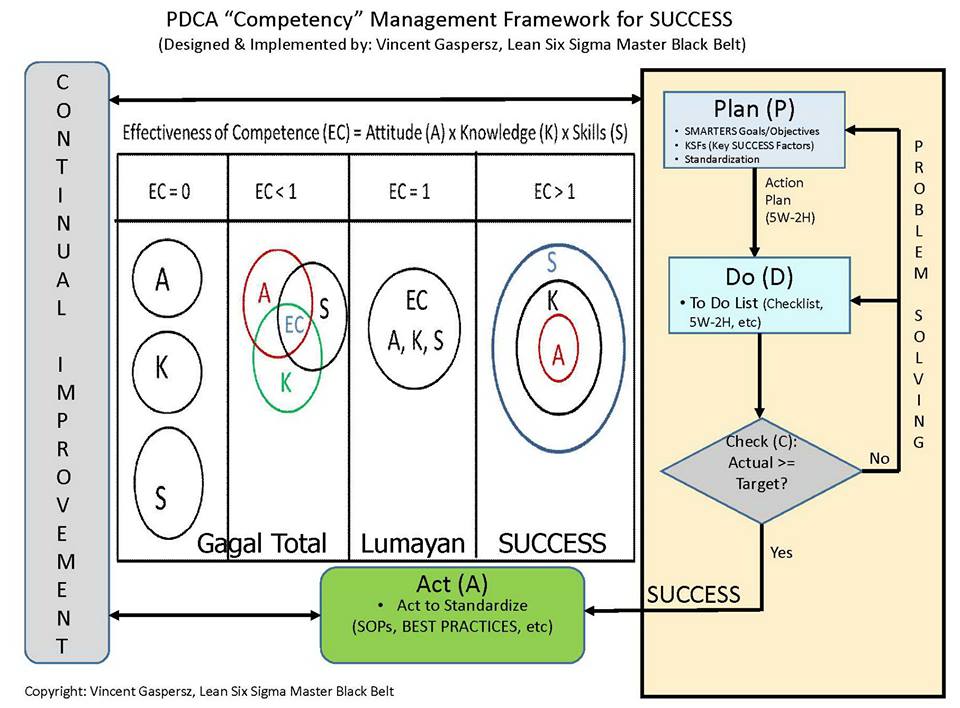 “Without questions there is no learning. BUT You should not ask questions without KNOWLEDGE”

“Without questions there is no learning. BUT You should not ask questions without KNOWLEDGE”

In many writings, I HAVE mentioned that SUCCESSFUL career in business and industries is highly dependent on the EC (Effectiveness of Competence), which is the intersection or multiplication or integration between Attitude (A), Knowledge (K), and Skills (S).

In many cases, university graduates in Indonesia have very low EC value (between 0-1) with the tendency towards ZERO. There is NO strong correlation between the value of Achievement Index (GPA) and the Effectiveness of Competency (EC). Although we assume a new graduates from university in Indonesia, because of will, independent learning, and the link and match policy from the university, has BEEN able to increase the values of Attitude (A) and Knowledge (K) toward 100%, BUT that Skills have yet been applied is still zero (S = 0); consequently the value of EC = A x K x S = 100% x 100% x 0% = 0.

Chart 2 attached below gives some of the following illustrations:

At this present time, we know that the new graduates from universities whether in Indonesia or abroad, are very rarely (almost close to zero percent) in the illustration number 4 above, let alone the number 5!

These recent graduates from higher education institutions (whether Diploma, Bachelor, Master, or Doctorate) who have very low EC (between zero and 1) are hoping that the existing system in the world of business and industries that MUST improve their EC (Effectiveness of Competence), by increasing the values ??of Attitude (A), Knowledge (K), and S (Skills). Such understanding is considered wrong, because of the following considerations.

NOTE: when VG graduated from the Doctorate Systems and Industrial Engineering program from ITB (GPA = 4.0), he FAILED to become an employee at PT. Pertamina in 1991 (not accepted in the selection process). BUT in the process a few years later, VG invited to be a Consultant for Building Performance Management System based on the Malcolm Baldrige Criteria for Performance Excellence (MBCfPE) in PT. Pertamina and be a guest instructor at Pertamina Learning Center (PLC)!

I often feel CONCERNED when knowing that a new graduates from university, when entering the world of business and industry has NOT had education and industry training system, does NOT KNOW what to do because the company’s management are also still busy with the traditional ways of lifting the big stones relying on strength alone (relying on Attitude only).

It can be counted how much losses (opportunity losses) of the nation of Indonesia as a result of INEFFECTIVENESS and INEFFICIENCY of the education and training systems since ECD (Early Childhood Education) to the University, which then continues until years, even the tens of years, a person becomes UNABLE to increase his value of Effectiveness of Competence (EC) in the world of business and industries in Indonesia. Based on this FACT, then the managers of universities in Indonesia should be aware of and understand the things above, so that their RESPONSIBILITY is not just to graduate thousands of new graduates with words of motivation only (relies on Attitude alone), WITHOUT equipping the graduates with the sufficient Knowledge (K) and Skills (S). To be noted that SUCCESS in the real world (University of Life) depends on how much the value of Effectiveness of Competence (EC), which is the intersection or multiplication or integration between Attitude (A), Knowledge (K), and Skills (S).

Based on my personal experience that HAVE entered the practical world of business and industries, ranging from Management Trainee (MT) since 1991 when I graduated from the Doctoral program in Systems and Industrial Engineering ITB (GPA = 4.0); had participated in various professional management courses including obtaining professional competence, implementation experience of management systems for more than 25 years, etc., so that I HAVE had a value of Effectiveness of Competency (EC) beyond one (perhaps 200%, 300%, or to infinity, because I am still constantly learning by using PDCA management Framework), I feel confident that Indonesia is ABLE to build System MODEL of Education and Training since ECD (Early Childhood Education) to the University in order to produce recent university graduates who have EC (Effectiveness of Competency) above one, at minimum equals to one. My idea is to build a professional PRACTICAL laboratory of Business and Industries in the world of higher education, following the model of education in the faculties of medicine around the world (including Indonesia), producing Entrepreneurs and/or Intrapreneurs to work in business and industries’ companies (which are founded by Entrepreneurs) as shown in Chart 3 attached below.

An example of Learning Model for Nurses about the Quality & Safety Education that simultaneously integrates Attitude (A), Knowledge (K), and Skills (S), so that increases the value of Effectiveness of Competency (EC) = A x K x S, is shown in Chart 5 attached below.

Having graduated from schools and universities that HAVE applied that 21st-century learning model and entering the labor market, the new graduates of those schools and universities will continue the learning and growth in the world of business and industries; in this case the management of Business and Industries have also built professional MODEL of Education and Industrial Training Systems in order to speed up those university graduates to achieve SUCCESSFUL careers in businesses and industries.

The above strategies will bae ABLE to increase the value of Effectiveness of Competence (EC) on Human Resources (HR) in Indonesia to reach the value of far beyond one towards infinity, which is to reach CREATIVITY and being INNOVATIVE as shown in Chart 8 attached below.

If we are able to increase the value of Effectiveness of Competence (EC), then we will be able to increase PRODUCTIVITY, which will automatically save time and improve the monetary welfare (economic revenue) for all Indonesian citizens who have graduated from professional school system (See Chart 9 attached below).