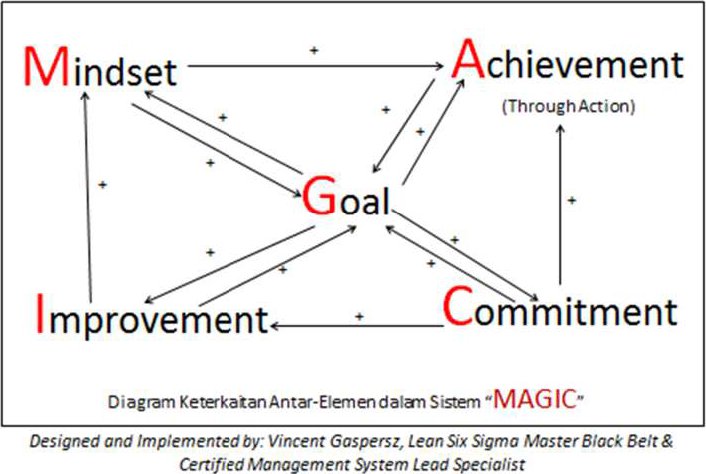 The word MAGIC or mysticism, spell, talisman, “leu-leu” (Kupang language) or others have been commonly known to many people. For those who are highly educated or uneducated, when the thrust of self-MOTIVATION is weak, they will be trapped in the use of ancient MAGIC (mystics, spells, etc.) to help them achieve SUCCESS in any field.

When I met many people on various occasions, I always asked if they believed in “MAGIC” or in other terms such as spell, talisman, “leu-leu”, etc.? Many people always smiled, which had many meanings. Then I always asked why would someone who go to a shaman or place that were considered “sacred”, after returning from that shaman who gave “roots of wood wrapped in a white/black cloth”, then became motivated to work hard and SUCCEED?

Actually their secret of SUCCESS secret is discussed below, where we can learn how their brains, who go to those shamans, work systematically as well as instinctively or naturally and they have had implemented Systems Thinking in the process. Thus, we can study systems thinking through the word “MAGIC”. If my writing is read by the educated shamans, then they will become even more PROFESSIONAL because they participate in disseminating systems thinking to their patients.

When someone with low motivation decided to go to a shaman, he/she certainly had a clear goal, which was to be SUCCESSFUL in a particular field, for example: to be SUCCESSFUL in business, education, position, etc. In the context of modern “MAGIC”, it is said that someone has already had a clear GOAL, namely: SUCCESS. It would be impossible for someone to go to a shaman and ask for FAILURE or set a goal to make him/her FAILED.

This SMARTER (Specific, Measurable, Achievable/Actionable, Result-oriented, Time-bound, Empowerment, Reward & Recognition) goal has been unconsciously embedded in the subconscious (brain) mind that will turn into attitude, habit, and everyday character toward SUCCESS.

The PROFESSIONAL shaman will ALWAYS declare that any GOAL (SUCCESS) can be fulfilled with VERY HEAVY requirements, where the more difficult a GOAL is to be achieved, the more difficult the requirements would be, for example: one OUGHT to prepare a “Foreign” buffalo worth hundreds of millions or billions of rupiahs. BECAUSE the person who seeked SUCCESS through that shaman believed, he would happily fulfill that shaman’s request. Through negotiations and transactions, the shaman would give a physical object that could be seen and held by that seeker of SUCCESS through that shaman.

Returning from the shaman, that person’s motivation would grow further because there had already been a “magical thing” that added to the spirit of working (including doing heavy rituals) for SUCCESS. A PROFESSIONAL shaman must give a HEAVY ritual requirements, so that the seeker of SUCCESS through that shaman becomes more trusting. By the time a person has been motivated to perform any ritual, no matter how difficult it may be, then at that moment, the GOAL has been able to change that person’s mindset to perform ACTION.

In the view of modern management, then that clear target of GOAL has been able to change the MINDSET of those who have that GOAL toward the Goal Achievement called SUCCESS.

Though that seeker of SUCCESS through the shaman, during heavy rituals, had NOT reached GOAL (SUCCESS), but because of the MINDSET, he/she had been convinced that at some point in the future he/she would be SUCCESSFUL, so at this time of waiting, he/she had created room for continuous improvement from his/her ACTION. In this case he/she has created the OFI (Opportunity for Improvement). Ultimately through Commitment to constantly work, make improvements, followed by heavy ritual as a requirement from the shaman, then that seeker of SUCCESS through the shaman would reach GOAL (SUCCESS). Such is the glimpse of working mechanism through traditional MAGIC.

Now do we see how modern “MAGIC” works in the developed countries where the majority of society always think critically and rationally? If someone has a strong motivation, whether highly educated or uneducated, if we look at his/her daily behavior, habits, and characters, then within him/her, he/she has consciously or unconsciously been using modern “MAGIC” in his/her pattern of Systems Thinking. In this case, he/she does not rely anymore on objects or talismans (ancient MAGIC), but he/she has depended on that power of self that has strong MOTIVATION. Such strong motivation is called the modern “MAGIC”, which comes from within oneself that has been embedded in the subconscious mind so that it forms the MINDSET for SUCCESS.

The modern “MAGIC” referred to in this writing is an acronym consisting of five main elements intertwined with one another that shape the behaviors, habits, and characters of SUCCESSFUL people who consciously or unconsciously have applied Systems Thinking in their daily lives. The five elements of the word “MAGIC” are: Mindset, Achievement, Goal, Improvement, Commitment shown in the attached Chart above. In the attached chart above we see that what becomes the central point for controlling everything towards SUCCESS is GOAL. We can map using systems thinking where each element of the word “MAGIC” is related to the POSITIVE direction (giving POSITIVE energy).

SUCCESS starts from GOAL to reach SUCCESS. Furthermore, the GOAL that is compiled with that strength of SMARTERS (Specific, Measurable, Achievable through action, Result-oriented, Time-bound/Timely, Evaluation/Empowerment, Review/Reward & Recognition, Spirituality) will influence or create the correct Mindset. The mindset for SUCCESSFUL people is to create opportunities, whereas the mindset of FAILED people is either waiting or ignoring the opportunity, so that oftentimes the opportunity has been present is ignored with various justification reasons that reflect weak self-motivation.

The last element in modern MAGIC is: Commitment. Commitment can be equated with dedication, resolution, oath, promise with oneself to implement the other four elements in that MAGIC with the main objective of GOAL (SUCCESS). Commitment often becomes an obligation that restricts the freedom of acting “freely”, where SUCCESSFUL people have the habits to follow various rules and requirements as the duty to achieve GOAL which has been set in the form of SMARTERS Goal whose target will be increased continuously all the time.

The above descriptions show that if we want SUCCESS, then we no longer need to go to shamans or hermitage places to look for traditional MAGIC (spells, talisman, leu-leu, etc.), but we simply apply Modern “MAGIC” using Systems Thinking to achieve SUCCESS. Systems Thinking for modern MAGIC is shown in Chart 1 above.

In addition to learning systems thinking through modern MAGIC above, then SUCCESS itself has the following acronym:

SUCCESS is as easy as that, which is to apply modern MAGIC into the pattern of Systems Thinking.