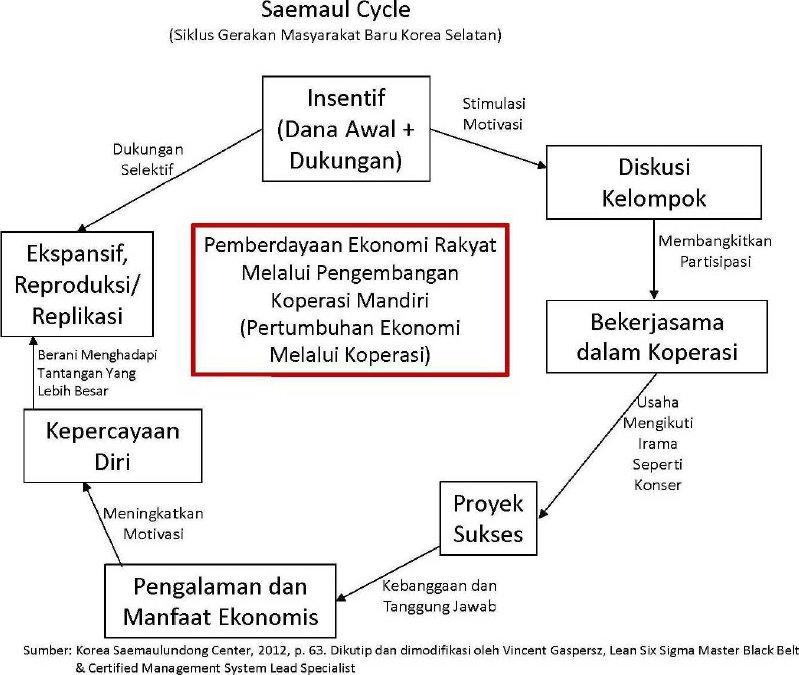 Case Study: Learning on the Success of South Korea

South Korea in 1960 was a poor country (with per capita income of US$79) with no adequate natural resources. But through the implementation of an export-oriented industrialization strategy supported by the focus on human resources development in an intensive and widespread cooperative vessel, South Korea was able to dramatically increase its national human resources productivity, that has brought South Korea in 2016 with per capita income of USD$25,458.90 (https://tradingeconomics.com/south-korea/gdp-per-capita) – up to about 322 times within 56 years.

While Indonesia, which has abundant natural resources, had only per capita income of USD 3,974.10 in 2016 (https://tradingeconomics.com/indonesia/gdp-per-capita). Indonesia only produced GNP (Gross National Product) of USD$844 billions; whereas South Korea, which is poorer in natural resources, was capable of producing GNP (Gross National Product) of US$1.133 trillions or about 1.34 times of Indonesia’s GNP.

How could South Korea progress very rapidly than Indonesia? It turns out it was due to the economic development strategy through cooperative that has economies of scale and economies of scope as well as the following New People Movement program that advances South Korea.

South Korea’s Agricultural Cooperative (NACF) has its own lines of businesses: banking and insurance; supply and marketing of agriculture, livestock supply and marketing; and other services. It had 2,446,836 members in 2011 and 15,262,611 associates members.

Furthermore, cooperatives in South Korea should not be imagined as Small Medium Enterprises (SMEs) as in Indonesia, because the sales revenues of those cooperatives exceed the conglomerates in Indonesia. As a comparison, in 2014, revenues from NACF was US$63.76 billions or equivalent to +/- Rp848 trillions. It was the world’s number 1 for cooperative in the sectors of agriculture and food industries.

The list of the top 20 cooperatives in the world in the sectors of agriculture and food industries in 2014 is shown in Table 1.

Saemaul sought to improve the gap in the standard of living between the urban areas, which were rapidly evolving due to the application of export-oriented industrialization strategies, and small villages, which continued to fall into poverty. Collaboration through rural cooperatives continued to encourage the members of the communities, especially in rural areas (including urban areas), to participate in South Korea’s economic and industrial development process.

The initial phase of Saemaul was focused on improving the basic living and environmental conditions through various projects that concentrate on rural infrastructure development to increase the incomes of those rural communities.

Saemaul model, involving cooperatives in South Korea, is shown in Chart 1 above.

Saemaul has been adopted by the UN as one of the most EFFICIENT rural development models in the world. The Economic Commission for Africa (ECA) had decided to select Saemaul as the basic model for the Sustainable Modernization and Rural Transformation (SMART) Program in 2008. In addition, this Saemaul has been exported to over 70 countries to share the experiences of rural development around the world. Indonesia should imitate Saemaul in South Korea, because economic development through cooperatives that achieve economies of scale and economies of scope is the implemental manifestation of Article 33 of the 1945 Constitution.