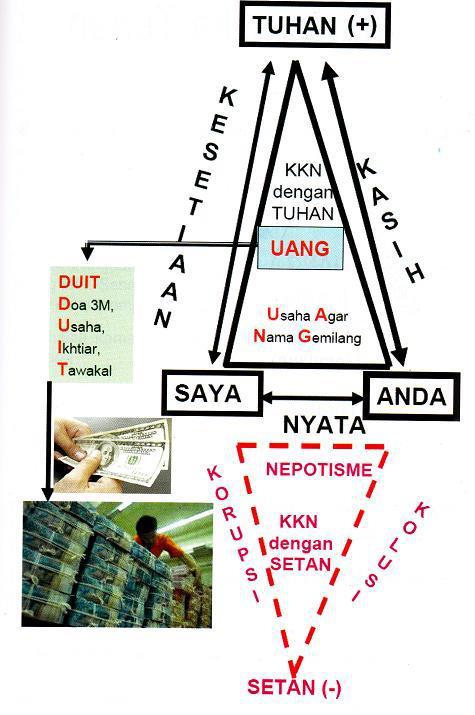 Do you want Miracle of UANG (Money) from God? It is better to be involved in KKN (Kesetiaan/Loyalty, KASIH/Love = Kehendak Allah Selalu Isi hati kita/God’s Will Always Fulfills Our Heart, Nyata/Real–Praktek Nyata/Real Practice) with God in order to receive wealth from God like: Prophet Abraham (Ibrahim), Prophet Salomon (Sulaiman), Prophet Job (Ayyub), etc.; instead of be involved in KKN (Korupsi/Corruption, Kolusi/Collusion, Nepotisme/Nepotism) with Devil, like many people in Indonesia. This is how to do it:

“O God, We ASK You to change our time into UANG (Money) in order to glorify Your Name (UANG = Usaha Agar Nama-NYA Gemilang/Effort to Make His Name Brilliantly Well Known). We BELIEVE in the Power and Glory of Your Name God. We BELIEVE with DUIT (Doa/Prayer, Usaha/Effort, Ikhtiar/Initiative, Tawakal/Trust in You), we will receive SUCCESS in the form of Financial Freedom. Thank You God for Your Heart’s Generosity. Amen.”

Number 000 is our sincere GOOD deed to others (especially the poor) accompanied by KASIH/Love (Kehendak Allah Selalu Isi Hati kita/God’s Will Always Fulfills Our Heart). Our task is to collect the number zeros as much as possible (000, 000, 000, 000); thus, when God rewards us in denomination from 1 to 9, our fortune will correspondingly abound to the number zeros (000, 000, 000, 000) we have collected! Some people have less fortune because their collected zeros are still lacking; whereas, some people have more fortune because their collected zeros have been plentiful.

“The secret of prosperity is generosity, for by sharing with others the good that life gives us we open up the well- springs of abundance.”

“Whoever is kind to the poor lends to the LORD, and he will reward them for what they have done.”

“One person gives freely, yet gains even more; another withholds unduly, but comes to poverty.”