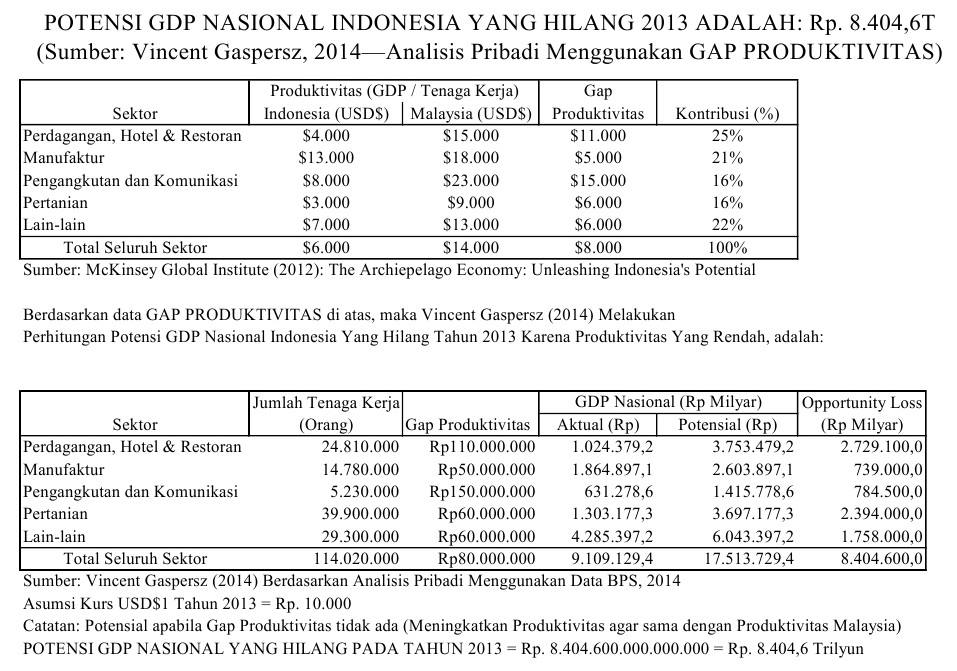 Instead of continually polemizing about the Potential Loss of Rp 7,200 Trillions WITHOUT FACTS and ANALYSIS, then VG HAS done scientific analysis using Productivity Gap Analysis as seen attached, and found that Indonesia’s 2013 Potential GDP that was LOST due to Low Sectoral Productivity is: Rp 8,404.6 Trillions. If Abraham Samad (Chairman of KPK) still HASN’T BEEN ABLE to scientifically prove his claim, then VG has proved it with scientific reasoning.

What is Productivity Gap Analysis, please read the explanations in the following website:
http://www.tutor2u.net/blog/index.php/economics/comments/qa-what-is-the-productivity-gap

Based on Productivity Gap Analysis, then IT IS NOT IMPOSSIBLE that if PRODUCTIVITY can be increased by just 50%, there would be increase of Rp 4,000 Trillions in National GDP, and through increasing quality and productivity, then Indonesia’s economic growth can reach 10% per year, so that Indonesia’s per capita income COULD increase twice as much (200%) CONSISTENT with Presidential Candidate Prabowo Subianto’s Statement.

In Presidential-Vice-Presidential debate on Sunday, June 15th, 2014, Prabowo Subianto quoted Abraham Samad’s statement (Chairman of Komite Pemberatasan Korupsi/Corruption Eradication Commission) that there was a sign of national income “leakage” of Rp 7,200 Trillions. Then, he further stated that his Expert Team’s analysis on the level of leakage was Rp 1,160 Trillions; BUT I would just round off the amount to Rp 1,000 Trillions.

Following that debate, like a “wildfire” these numbers were addressed by the public and made an uproar. Subsequently, KPK (Komite Pemberantasan Korupsi/Corruption Eradication Commission) stated that the number of Rp 7,200 Trillions said by Abraham Samad (KPK Chairman) had not been based on scientific study. Wow, “perhaps” Abraham Samad’s statement is also ASBUN (Asal Bunyi/As long as it sounds).

After KPK’s objection, then the public’s focus of talks turned into the number Rp 1,000 Trillions. I was waiting Prabowo’s Expert Team to explain to the public, but the emerging response was like someone who polemicized WITHOUT data (fact) and analysis. Since I was curious, I then tried to track how Prabowo’s Expert Team calculated that leakage of Rp 1,160 Trillions. I found through a Youtube video, and turns out, the number of Rp 1,160 Trillions was obtained as follows:

The Leakage and Losses of National Wealth in 2013 Prabowo’s Expert Team’s Version:

Wow, it turns out such breaking news only came from very simple analysis that was debatable too.

It is not that simple to analyze of a national problem, just by using debatable data without scientific accountability. The result: another sophistic debate that can easily be objected by many people! Does this nation want to be managed without fact (data) and analysis? If it does, how is the accountability of public policies? It is fitting that Indonesia can never move forward!

An intelligent and firm man like Mr. Prabowo MUST BE helped with intelligent and SHARP ANALYSIS so he can be like a “Buldozer” that CAN FLATTEN this INDONESIAN “JUNGLE”. Imagine, with only such simple analysis, he boldly and fierily expressed the data; it is unfortunate that his Expert/Advisory team was VERY WEAK. If Mr. Prabowo was to be given strategic information about the roots of Indonesia’s problem, plus Intelligent and Sharp analytical support that was based on FACT (DATA), then I’d believe DEFINITELY Indonesia will be SUCCESSFUL.

Best Regards for SUCCESS to Prabowo’s Team of Experts!

Vincent Gaspersz, Professor of systems engineering and industrial management. He wrote doctoral dissertation on Linkage Between Industrial Structure and Productivity in Indonesia, 1991 (Study of Economic Development and Industrial Systems, Period 1967-1988).