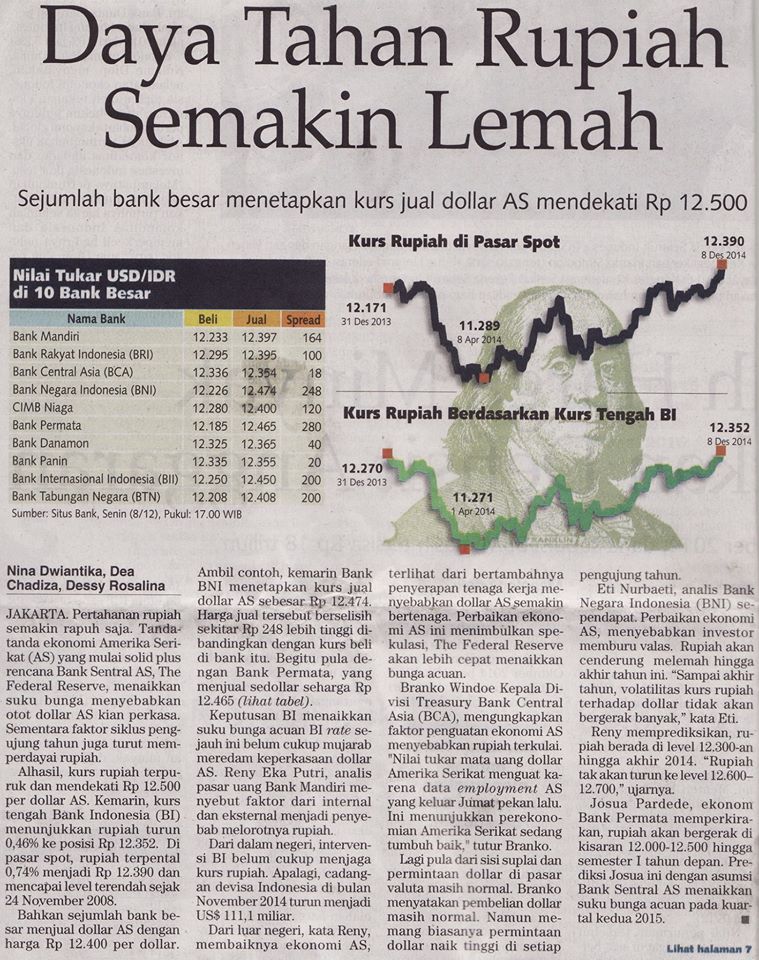 “PLEASE CALM DOWN, it’s nothing, our economic fundamental is STRONG, government is working on all problems like oil MAFIA, Illegal Fishing, austerity budget, bla bla bla, and so on”. That would be the statements made by the Coodinating Minister for Economu, Minister of Finance, Bank of Indonesia Governor, and other government officials on televisions and mass media just like the beginning of economic crisis in 1998!

If those statements like above actually show up coincidently from government officials on televisions and mass media, then that would be the “signs” that Indonesia is entering “ECONOMIC CRISIS” like the same event in 1998!

Business people and those who are FINANCIALLY/MACROECONOMICALLY SAVVY have indeed predicted that Rupiah would CONTINUOUSLY WEAKEN if the roots of current account DEFICIT problem continues to increase, Foreign DEBT in USD continues to increase, and the PRINCIPAL + Debt Interest payments continues to increase. At the same time, there is a policy from US Government to increase USD interest rate in USA, plus the American economic condition that is getting better SO THAT USD that is freely roaming in world markets would “come back home” to USA.

For business people and those who are FINANCIALLY/MACROECONOMICALLY SAVVY, the time would be the OPPORTUNITY to invest in the stock market by buying “blue chips” stocks that would have FALLEN; after buying them, just keep them while waiting for the PRICES to INCREASE Minimum 100-200% by the time Indonesia’s macroeconomy would have rebounded!

What is meant with the statement: Pengendalian Moneter oleh pihak Bank Indonesia/Monetary Control by the Bank of Indonesia in that article published by Kontan Online (Business & Economy Media) is Bank of Indonesia’s Intervention in the money market to buy CURRENCY (especially USD) in order for Rupiah NOT to continuously weakens!

It was proven that the Currency Rate USD-IDR during November 2014 “seemed” STABLE in USD 1 = Rp 12,100 although QUITE a LOT of money ought to be spent, resulting in the reduction of foreign exchange reserves by about USD 900 millions.

But, why, entering December 2014, does Rupiah keep FALLING OFF? These are signs that BI Intervention for Monetary Control (Buying USD in the money market)!

Would BI “dare” to continuously drain the existing foreign exchange reserves ONLY for MONETARY control needs (buying USD in the money market)?

Just a note that the foreign exchange reserves of USD 111.1 Billions ARE ONLY ENOUGH to pay for Short-term Debt’s INTEREST just twice (for two months)!

As I pointed before that increasing fuel oil price is an EMERGENCY ACTION! The roots of the problem is to IMMEDIATELY fix or close Current Account DEFICIT (Imports are greater than Exports) that keeps INCREASING! It is true that increasing fuel oil price would reduce SUBSIDY, which EMERGENTLY can save the macroeconomy. But, the FOCUS NEEDS to be on the roots of the problem of that ever increasing Current Account DEFICIT (Imports keep increasing, BUT exports are stagnant or decreasing). I HAVE NOT seen yet the STRATEGIC policy (of short-term, medium-term, or long-term) that is shared to public from the government of Jokowi-JK to IMMEDIATELY close the Current Account Deficit that becomes the roots of all Indonesia’s economic and monetary problems.

But, I’m still optimistic that there’ll be improvement during Jokowi-JK government IF they can use “CLEAN and Conscientious” experts to advance Indonesia. We MUST give them a chance MINIMUM 1 (one) year to reform Indonesia’s macroeconomy that HAS WORSENED since 2012. It is unfortunate that former President SBY “let” Indonesia’s macroeconomy to worsen since 2012 until October 2014.

And exactly in 2015 all the piles of problems that have begun since 2012 will explode! In an EMERGENCY situation, government MUST maintain the BASIC needs in order to make them stay available (by any means necessary)and to maintain “CALM” so that various STRATEGIC efforts, that focus on Indonesia’s macroneconomic roots of problems, can proceed EFFECTIVELY. Because in a “PANICKED” situation like having the scarcity of basic needs, then the condition of 1998 would actually happen. It is indeed difficult to be “wong cilik“/the poor in a nation managed by government that DOESN’T HAVE good social security like the developed nations. In Indonesia, what happens is: “The Rich are Getting Richer and the Poor are Getting Poorer” DUE TO MISMANAGED government policy!

If in Indonesia, the situation is “deliberately” made worse for the interests of few people to open up a chance to do CORRUPTION.

Just look at the fuel oil SUBSIDY Budget that had been made to CONTINUOUSLY increase over the years since the era of SBY-Boediono government! Why is that? This is the scenario!

The premium fuel price with RON 90/92 MUST be reprocessed (with additional costs) in order to fulfill the CRITERION of Premium SUBSIDY with the RON 88 specification. Weird, isn’t it? High quality product (RON 90/92) is downgraded (into RON 88) in order for such a large amount of fuel oil SUBSIDY Budget can be usable. This is the finding of the Oil and Gas Trade Reform Team headed by Faisal Basri.

Why is that? Because CORRUPTION on that fuel oil SUBSIDY Budget with that RON 88 (Karena KORUPSI pada anggaran SUBSIDI BBM dengan RON 88 itu (no matter how much it is) WON’T BE made an issue by KPK based on the reason that POLICY CAN’T be criminalized!

Thus, the main FOCUS IS NOT on Efficiency and Productivity on each ECONOMIC ACTIVITY, BUT how much fund that CAN potentially be corrupted WITHOUT being exposed to laws that state such activity is considered as an act of CORRUPTION. This phenomena have penetrated all government institutions from the central government to those governments in the provincial, district, sub-district and village levels in Indonesia.

For that reason, government ALWAYS quibbles so that every POLICY (Including Policy that is “DELIBERATELY MADE” FALSE) CAN’T be investigated or criminalized!

This is an example of news about ROTTEN rice inside Papua’s BULOG (Bureau of Logistics) warehouse, in just one of the provinces in Indonesia. How about in all the provinces across Indonesia? How many hundred thousands tons of ROTTEN rice would potentially there be?
http://www.papuapos.com/index.php/utama/item/4692-bulog-papua-tidak-tahu28-ribu-ton-beras-busuk

And why was rice made ROTTEN and thrown away unnecessarily? Because the wasted rotten rice would have its own accountability (including for example, there were only x tons of rice actually ruined and thrown away; but what would be reported would be 10 times or more tons of rice ruined and thrown away). All of these have their own accountabilities SO THAT they can’t be investigated by KPK or other law enforcement institutions. The same goes with that fully corrupt IMPORT policy (DELIBERATELY made so Indonesia CAN’T NOT TO IMPORT).

That’s why what’s needed by Indonesia is “HONEST and Conscientious” people who FEAR God, NOT Fear KPK or other other law enforcement institutions in Indonesia.

When there would be “PANIC SELLING” where IHSG drops, then we would go in to buy EXCELLENT blue chips stocks such as: BRI, Mandiri, BNI, BCA. Property stocks that would be worth buying are: Alam Sutera, Sumarecon. Then, just let those stocks to kept (perhaps 1 – 2 yers) until the time that Indonesia’s macroeconomic condition would have improved due to future economic reform by Jokowi-JK, in which we would resell those stocks at higher and increased prices. This would be BETTER and more profitable than keeping GOLD, buying land, etc.

And usually in economy if one economy continuously weakens, there would DEFINITELY the lowest point, and it would rebound or increase/improve BECAUSE there has been SIGNIFICANT correction. That is common in the system where the nation’s government is REACTIVE. If Indonesian government had been PROACTIVE and ANTICIPATIVE since 2012, then there should have been a SIGNIFICANT improvement. Thus, for Indonesia currently, there would be SIGNIFICANT improvement in 2015-2016, so that its macroeconomic would start to get better by 2017 and so on.