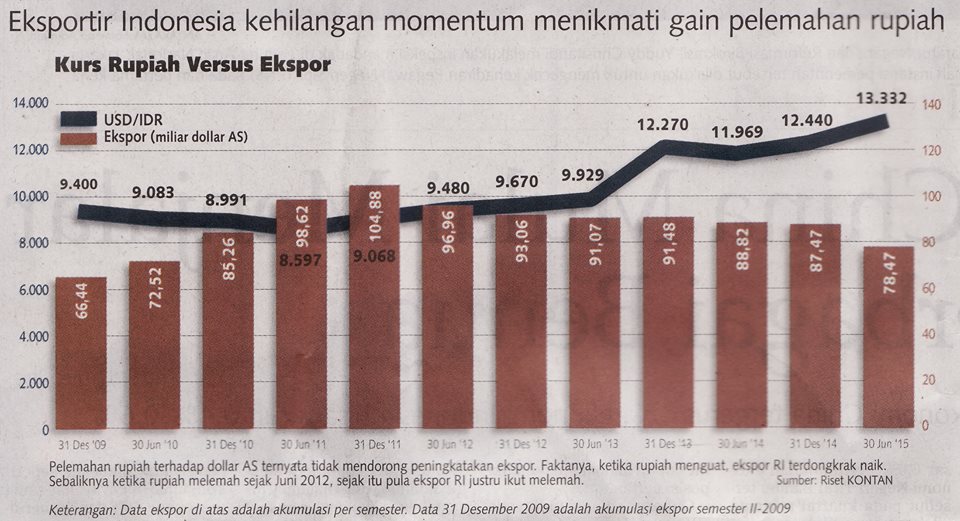 The following FACT has disproved the merely-sounding opinion WITHOUT information and analysis that says the weakening rupiah would increase Indonesian products’ export competitiveness, which in turn would increase the value of Indonesian EXPORTS. Just to be known that MANAGEMENT is based on FACT and ANALYSIS not based on merely-sounding opinion (WITHOUT SOLUTION); thus, EXPORT increase is not just a talk, BUT there are factors or variables that must be measured, planned out, done, controlled, and improved continuously in MANAGEMENT principles of PDCA = Plan, Do, Check, Act.

Beside the quality factor and non-competitive prices of Indonesian manufactured products in the international market, there are other factors like: demands toward primary commodities, including quarry products (Indonesia’s primary industry), that have been declining as, the prices that have been falling, and the difficulties of Indonesian manufacturing industry’s products to penetrate the European and US markets due to high import tariffs; thus making them not competitive from the selling price stand point.

The latest Indonesian government’s policy through the Regulation of Minister of Finance No. 132/PMK/010/2015 is to increase all tariffs of imported consumer goods varyingly from 15% to 150%. Consequently, all imported consumer goods would certainly increase. This form of protectionism would DEFINITELY be “responded” by other countries that would also want to protect their domestic markets.

Note: read that with the latest regulation of minister of finance that implements import tariffs of consumer goods from 15% – 150% would DEFINITELY increase the prices of consumer goods. There would be layoffs everywhere due to economic downturn. Do you think the purchasing power of Indonesian people, who majoritily are workers, won’t be affected? Please VERIFY my analysis and prediction in the next 6 months; I could be WRONG!. Perhaps by keep talking everytime that Indonesia WOULD SURELY ESCAPE, WOULD NOT be NEGATIVELY IMPACTED could at least boost the confidence to SUCCESSFULLY pass through the storm of economic crisis that has spread everywhere around the world.

All the merely-sounding statements, that state Indonesia’s economic FUNDAMENTAL is strong, etc., would hopefully receive MIRACLE from God so that Indonesia could escape the ECONOMIC CRISIS in the next 6 – 12 upcoming months.

The following analysis and information is aimed to those who DON’T understand the problem in the actual manufacturing industry in Indonesia and always issue statements WITHOUT FACT nor based on accurate information.

To be understood that the average Costs of Good Sold (COGS) of manufacturing industries in Indonesia range between 60% – 80% (depending on the production efficiency) and minimum 60% of this cost structure depend on the import price that MUST be paid in USD(American Dollar). Therefore, the statement that the weakening of rupiah will reduce the manufacturing cost ONLY applies if 100% of the raw materials’ contents come from the land of Indonesia. BUT who can ably show that there exists a manufacturing industry in Indonesia that DOESN’T use minimal IMPORTED raw materials’ content, say even ONLY 20% maximum?

Data from Bank Mandiri in 2014 shows that the import content from manufacturing industry in Indonesia is not declining, BUT increasing from 62% to 68% for the past five years. This means the dependence on imported raw materials ARE not improving or declining BUT are worsening or increasing. That Indonesia’s manufacturing industry relies on local raw materials from the land of Indonesia ONLY exists in the imagination!

The economic crisis, that has begun to engulf the manufacturing industries in Indonesia since January 2015, hits both sides at once, which are the supply and demand sides. From supply side, it is marked with the higher increase in production costs of about 30%-40%, whereas from the demand side, it is marked with the decrease in Indonesian purchasing powers toward Indonesian manufacturing industry’s products that also contributes to the declining sales.

Economic crisis usually begins from the productive sectors (primary, secondary, and tertiary industries). If an industry went bankrupt or drastically declined, then there would be massive layoffs. Consequently, unemployment rate would rise and purchasing power of the people, who majoritily comes from the working wage/salary, would decrease so that the contribution from the consumption sector would also decrese. If exports also decline and consumptions too, then the only source of economic driver would ONLY be from the government consumptions, which is only about 8% in Indonesian economy. For government financing, then the government would add more DEBTS, which would heavily drain its foreign exchange reserves further. The economy slows down, then declines, and the economic CRISIS would happen in that country. It is very RATIONAL to have the result of analysis based on FACT, NOT merely-sounding feel-good statements!

Government have already known, as well as the government officials, that they CAN’T reveal the actual situation in order to NOT create panic and anxiety in the community. We are the ones who MUST intellgiently anticipate our family/household economy, so it would ONLY affect little on our family financial problem.

Can the government set rupiah’s exchange rate at whatever level towards foreign currencies, especially USD?

These are the most dominant factors that influence a country’s currency exchange rate compared to other countries’ currencies. If you want to set rupiah’s exchange rate at Rp 9,000 – Rp 10,000 per USD, firstly FIX those determinant variables.
http://www.seputarforex.com/artikel/forex/lihat.php?id=133671