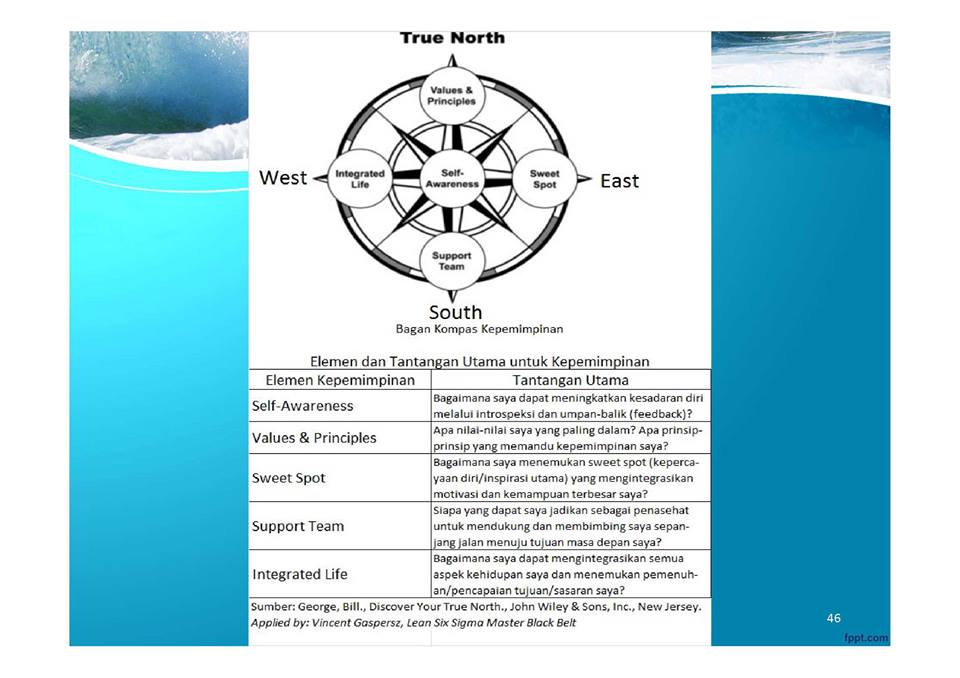 “True North” is a term popularized by Prof. Bill George, a Professor of Practical Management from Harvard Business School and a Former Chairman and a CEO of Medtronic. During the past 12 years of Bill George’s leadership, Medtronic has developed rapidly at an average of 35% per year starting from market capitalization of $ 1.1 billions to $ 60 billions.

According to Prof. Bill George, we’ll find Authentic Leadership within ourselves when we find our own “True North”. Bill George interviewed 125 SUCCESSFUL leaders and then wrote the book “True North” first time in 2007.

Once we’ve found the purpose of our leadership, then we will find a true leader within ourselves. I have read and implemented the Handbook of Finding Your True North “A Personal Guide”, written in February 2008, by Bill George, Andrew N. McLean and Nick Craig. I conclude, based on the application to myself that “True North Leadership” is the Compass to Lead Oneself Towards Clear and Focused Future Objectives WITHOUT deviating at all from that “True North”.

For those who have not yet found clear identity and life purpose in the present and for the future, I suggest you to read the book “True North” in order to find the “True North” that allows us to be a leader who is always on the path of our “True North”.

Before discussing about this True North, it is worth pointing out that in 1989 when Stephen Covey introduced Seven Effective Habits introduced, even I HAD read and applied them in myself. Even since the times of slumped in the 1970s in Kupang, NTT and in the 1980s in Java, I also HAD equipped myself with self-motivation readings written by Norman Vincent Pearle.

According to Stephen Covey, we MUST win ourselves first in order to become an independent human being who does not rely on others. These three habits should be practised, namely: (1) Be Proactive, (2) Begin with the End in Mind, and (3) Put First Things First based on the PARETO principle, which is 80% of the desired result comes from 20% of the main activity. We will become a SUCCESSFUL independent person, if we have no more problem with these three habits. These three habits create a PRIVATE VICTORY.

After we have won our PRIVATE VICTORY, then we MUST win environment or PUBLIC VICTORY, by applying habits such as: (4) Think Win-Win with other people, (5) Seek First to understand, Then to be understood, and (6) create synergies when cooperating with other people so that the result of 1 + 1 will be far greater than just 2 alone. Perhaps 1 + 1 = 10. I HAVE applied the principle of 1 : 10, if other people give me 1, then I MUST return minimum 10 to others.

After we have won the PRIVATE VICTORY and the PUBLIC VICTORY, then we MUST always implement the 7th habit, namely: learn constantly to improve our performance (Sharpen the Saw) through constantly improving problem solving skills and INNOVATING.

If we HAVE applied The Seven Effective Habits from Stephen Covey (the 8th Habit before Stephen Covey left the world, he had introduced the habit of Spirituality), then it will automatically facilitate us to find and implement the “True North” Leadership, Because indeed that “True North” is based on the Seven Effective Habits from Stephen Covey, introduced in 1989, when I was taking Doctorate classes in System Engineering and Industrial Management while at the same time preparing the Doctoral Dissertation at Bandung Institute of Technology (ITB).

In the latest edition of Discover Your True North (updated second edition, 2015) book, Bill George expresses the Leadership Compass Model as seen in the attached chart above. I will explain it in my personal case of how I found and applied those True North principles after I rose up from of the barrage of failures in Kupang, NTT, ranging from failing a grade many times both in high school and university together with the financial difficulties to finance my school tuition by being a city transport driver. Subsequently I found my True North and applied the True North principles in order to lead myself towards SUCCESSFUL future.

In the Leadership Compass chart, True North consists of the Vision, Mission, Values and Principles that MUST be believed 100% by us. Because these things that would be the guiding direction to lead us toward our future as long as we live in this world. There SHOULD be no slightest TOLERANCE deviation to this True North, so that if the COMPASS’ direction had changed even by a little bit, then we’d HAVE to realign the direction of that True North.

Seeing the Leadership Compass Chart, then there are five elements of leadership key which at the same time can be major challenges, because they are difficult to maintain. All of those require strong COMMITMENT.

I will sequentially discuss corresponding to the elements in that Self Leadership Compass.

Firstly, Self-Awareness. The main challenge is how to increase self-awareness through introspection and obtaining feedback? As someone who has had problems with life from childhood to adolescence (always repeated grades and was financially poor), then I MUST be self-conscious and SHOULD NOT be messing around with my future. So that there MUST NOT exist at all in oneself to COMPLAIN regardless the circumstances, whether when it might be the difficulties to understand the courses of STATISTICAL theories during the Master’s program of Applied Statistics at IPB because there was no strong educational background in Mathematics (Not Understanding Calculus: Differential and Integral), or when taking the lectures of Operations Research, Systems Modeling, Management, etc. in the Doctorate program of Systems Engineering and Industrial Management at ITB. Also as a fresh graduate who started working as a Management Trainee (MT) in the industry with a very small salary and travelled from home in Bogor to work in Jakarta using City Buses, often had to stand near the back door, because the bus had been fully crowded. I personally remember the song: Bis Kota // City Bus by Franky & Jane, while Bosses drove BMW and Mercedes. I often play that Bis Kota // City Bus song to reflect on the past and to be GRATEFUL for my life today.

Thirdly, we must find the Sweet Spot, namely: find the self-confidence or the main inspiration that integrates our self-MOTIVATION with our best ABILITY. I found the Sweet Spot for the first time when I was accepted to attend the Master’s program in the field of Applied Statistics and managed to PASS with a final grade of A. When I told myself that a VG not a FOOL, although that had been uttered by former teachers in high school and undergraduate that VG was STUPID when dealing with numbers and graphs! After this first Sweet Spot was found and it raised the self-MOTIVATION, then continuously, we would get the best of ourselves and the door of SUCCESSFUL future would be surely opened in time. It is true when people say that there is NO human who is constantly STUPID or SMART all the time!

Fifth, we HAVE to integrate all of the things above (Four Primary Elements of Self-Leadership) with Life so that they become one Integrated life, with regards to: Professional/Career, Personal, Family, Spiritual, Social and Community, etc.

From the above explanation, if we HAVE found the “True North” within us, we will then be able to lead ourselves using the Self-Leadership COMPASS’ Direction of that “True North”. These principles of “True North” Leadership were adopted by Lean into Lean Leadership.

Following the above description, then we can use the following 5C for SUCCESS, namely: (1) Change (change following the True North), (2) Challenge (address the existing key challenges in order to become personal habit and character), (3) Chance ( create opportunities), (4) Choice (choose the opportunity that gives the best results), and (5) Commitment (be STRONGLY committed to follow the True North).