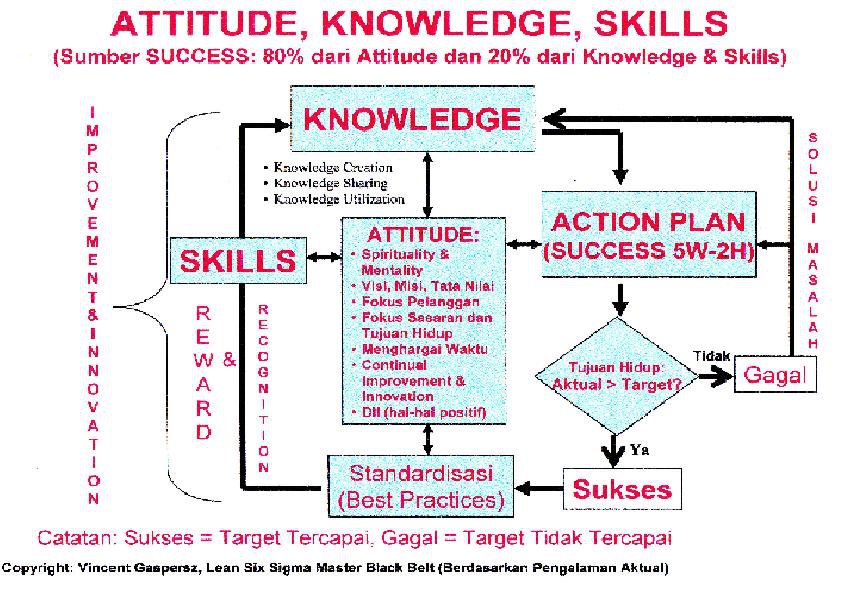 Although everyone is given the same Input resource of TIME, his/her Output (SUCCESS) may be different/varied due to the differences in the Process of managing that Input resource of time. Based on personal experience, about 80% key of SUCCESS come from ATTITUDE and only 20% come from Knowledge and Skills.

In the book of Developing SUCCESS Character based on The Ultimate SUCCESS Strategy, I have introduced seven secrets of SUCCESS, which follow the SM-VOMAR acronym: (1) Sprituality, (2) Mentality, (3) Vision and SMARTS Objectives, (4) Opportunity, (5) Multi Objectives, (6) Acceleration, and (7) Reward & Recognition.

Since I was a high schooler and an undergraduate student (in 1970s), I had already believed that SUCCESS is determined by ourselves. It is not determined by other people like friends, co-workers, bosses, etc. Everone will SUCCEED, because SUCCEED is a choice, more specifically the choice to follow SUCCESSFUL values, such as: Honest, Disciplined, Punctual, Trustworthy, Useful for Others, and other positive attributes that are crystalized into the “Basic Mentality”, which has become ATTITUDE.

I am grateful to God that thousands of my SUCCESS books have been read by Indonesians, especially students in universities. Thousand books have been published in University of Nusa Cendana (Undana), Kupang, and in the near future, when celebrating Undana‘s birthday”, there will be a Free Workshop to about 100 Undana instructors as a continuation of the first batch, which was attended by about 40 officials (Rector and Deans) of University of Nusa Cendana in Kupang. I observe close to 20 years of business and industry practices in Indonesia; we always face recurring problems, but the solution to the problem never reaches the root of the problem. The solution is only associated with personnel replacement. We never dare to evaluate ourselves. When facing problem, we should always ask ourselves: MASALAH/Problem = Mengapa Aku SALAH?/Why Am I Wrong?, then we would correct the problem through Action Plan: Success 5W-2H as seen in the attached diagram. When facing Problem, we generally always seek the causes outside ourselves. We then start blaming others, eventually “Blame Ma/Mother, MASALAH/Problem = Ma/Mother, Salah/at Fault, blaming our own Mother why giving us birth to this world?”. Many suicide cases end tragically because there was nothing left to blame, after blaming MA/Mother, then reckless decision of SUICIDE is being taken!!

Hopefully we can contemplate those things above, and beginning from ourselves, because SUCCESS is choice that comes from Ourselves, in which 80% depends on our ATTITUDE and only 20% depends on our Knowledge and Skills. SUCCESS will increase more if we involve God since the beginning of our activities and TAAT/be obedient to God!

Indeed SUCCESS will not happen instantly or suddenly; BUT it must be planned and acted CONSISTENTLY and continuously. There are supporting factors that MUST be built and acted gradually; however, we would DEFINITELY reach SUCCESS eventually.

In 1974, when I was an undergraduate student, I HAD to be a bemo/minibus driver in Kupang in order to pay for my school. HOWEVER, I HAVE believed that I would DEFINITELY SUCCESS if those supporting factors were built and acted CONSISTENTLY. At that time, I read many MOTIVATIONAL book from Norman Vincent Peale about how to think POSITIVELY to all things experienced, including the big FAILURES!

The following picture shows the importance of building the INVISIBLE supporting factors, which would contribute greatly to that future SUCCESS. May you continuously reach SUCCESS in order to glorify God too in the process.