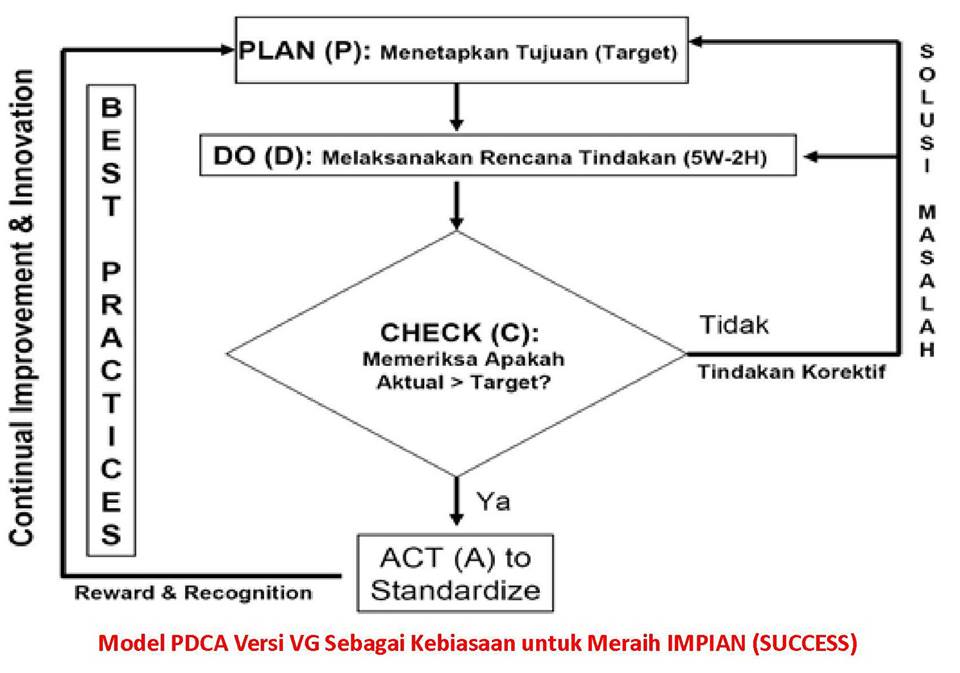 Where is Your Position When Working as A Professional?

John C. Maxwell, a leading author in the field of Motivation, Leadership, and PRAKTIS (PRAKtek TIDAK Sulit) // PRACTICAL (PRACtice IS NOT Difficult) Management, in his book Titled: Developing the Leader Within You expresses three levels of people (who have work skills) in working as professionals, namely:

How to Create a Leader?

I personally (based on actual personal experience) have always stated that each of us as a human (quality seed) has the potential to become a LEADER by implementing both of the following words, namely: PEMIMPIN = PEMIMPI + N // LEADER = DREAMER + N, where PEMIMPI // DREAMERS is someone who has a DREAM and N = NIAT (Nyatakan Impian Agar Terwujud) // INTENTION (State the Dream to be Materialized). If that letter N DISAPPEARS, then someone will only just be a DREAMER.

If so, when using this word PEMIMPIN = PEMIMPI + N // LEADER = DREAMER + N, then how are we ABLE to create ourselves to be LEADERS?

Firstly, we MUST dare to be DREAMERS, which are those who have DREAMS, although other people may consider them to be IMPOSSIBLE.

When I became a driver of city transport in Kupang – NTT (due to poverty) while being a student of the Faculty of Animal Husbandry at Nusa Cendana University who always FAILED (failed a grade twice in high school and was delayed two years in Animal Husbandry Faculty of Undana because I DID NOT PASS the Introduction to Statistics course and failed to take the Bachelor of Animal Husbandry exam because I had problems with the Dean of the Animal Husbandry Faculty of Undana back then who regarded my ATTITUDE as UGLY), I HAVE had a DREAM to pursue my education as high as possible and to grab all the academic degrees (Bachelor’s, Master’s, Doctorate), highest academic position (Professor), and professional titles (I already has had 10 international-standard professional titles). Back then when I expressed my DREAM, then everyone else declared that I was NOT NORMAL, a dreamer, etc. Whereas, isn’t it PEMIMPIN = PEMIMPI + N (N = NIAT = Nyatakan Impian Agar Terwujud) // LEADER = DREAMER + N (N = Intention = State the Dream to be Materialized)?

Why Should We DARE to Have DREAMS (be DREAMERS)?

Here are some reasons stated by John Maxwell in his book titled: Your Road Map for SUCCESS, that if someone has a DREAM, then he/she will get the following POSITIVE things:

John Maxwell, quoting Oliver Wendell’s statement, stresses that: “The great thing in this world is not where we are, but to which direction we will move”. Our DREAM will help DIRECTING where we will move towards our future.

Of course in order for me personally to not ONLY be referred to as a DREAMER, that is, someone who ONLY have DREAMS, then I MUST add the letter N, in order to be a PEMIMPIN = PEMIMPI + N (N = NIAT = Nyatakan Impian Agar Terwujud) // LEADER = DREAMER + N (N = Intention = State the Dream to be Materialized).

When we will state our DREAMS through the acronym of NIAT (Nyatakan Impian Agar Terwujud) // INTENTION (State the Dream to be Materialized), then we MUST implement long-term, medium-term and short-term plans. The beginning of this planning means we MUST apply PDCA (Plan-Do-Check-Act) into ourselves. Applying PDCA means we must implement Self-Management that constantly will lead us to those DREAMS of ours. When I personally set my DREAMS in the 1970s, then 25 years later, all my DREAMS have COME TRUE. The moment that we HAVE proved our DREAMS have been realized, then we may declare that we HAVE SUCCESSFULLY become PEMIMPIN (PEMIMPI + N/NIAT) // LEADERS (DREAMERS + N/Intention) for ourselves.

The description of those things above shows that Leadership and Management are NOT just studied as science courses, BUT they should be applied in daily life in order to become CHARACTER!

This CHARACTER-building process MUST begin from: (1) having the right MINDSET, (2) changing the ATTITUDE to match that right mindset, (3) applying positive attitude daily so to become HABITS, and (4) practicing habits continuously to become CHARACTER.

I thank all parties who have been involved consciously or unconsciously to the formation of my today CHARACTER. When there is a saying that my ATTITUDE is BAD, then I HAVE to fix it immediately.

An example of a Simple, but FATAL case: the Dean told me to move his bike from one place to another, BUT after receiving that bike’s key, I went looking for my friend who could ride a motorcycle in order to move that bike. The process of handing the bike’s key to someone was considered a FATAL mistake; thus, I OUGHT TO not be able to take exams(I was delayed for one year). I accepted that due to my BAD ATTITUDE, I should fail one year, and also my ignorance to Introduction to Statistics should also be paid through the failure of a single year. It is strange indeed that someone who was very agile in driving cars, BUT could not ride a bike (it is still the FACT until now). My MISTAKE: was not being straightforward (DISHONEST) to say that I COULD NOT ride a motorcycle! How could I possibly want to learn to ride a motorcycle while my time was SPENT OUT to drive a city transport of BEMO (in Kupang, a City Transport is called BEMO = BEcak MOtor // motorcab) for my school fees. ONLY rich people who could buy motorcycles back then in 1970s in Kupang – NTT. I was ONLY MENTALLY rich even though was POOR materially/monetarily!

So that the learning because of the failure above does NOT happen to someone else, ever since then I have ACTIVELY learned what are the CHARACTERS of SUCCESSFUL vs. FAILED people, so I that I CAN achieve all my DREAMS in the future.

John Maxwell has identified several important CHARACTERS of SUCCESSFUL vs. FAILED people, and concluded that SUCCESSFUL people are willing to do things that WILL NOT WANT to be done by FAILED people.

The differences are as follows:

I HAVE had a habit of applying the PDCA (Plan-Do-Check-Act) model in everyday life since the 1970s ever since it was introduced by Dr. William Edwards Deming; thus was also referred to as Deming Cycle. Deming introduced it in the form of circular wheels that divides the circle into four quadrants: P (Plan), D (Do), Check (C), A (Act). I personally prefer to use PDCA flowchart so I made the VG’s version for PRAKTIS (PRAKtek TIdak Sulit) // PRACTICAL (PRACtice ISN’T Difficult) purpose.

Basically, there are six steps in PDCA/PDSA cycle, namely:

An example of VG’s version of PDCA model to be a PEMIMPIN = PEMIMPI + N (NIAT = Nyatakan Impian Agar Terwujud) // LEADER = DREAMER + N (INTENTION = State The Dream to be Materialized) is shown in the attached picture above.

John Maxwell stated that the fastest way to create LEADERSHIP is by studying the knowledge of SOLUTION to PROBLEM so that we constantly go toward our DREAM. This means: a PEMIMPIN = PEMIMPI + N (NIAT = Nyatakan Impian Agar Terwujud) // LEADER = DREAMER + N (INTENTION = State The Dream to be Materialized) must learn the knowledge of SOLUTION to PROBLEM so that he/she will be ABLE to continue working when there are PROBLEMS that appear to hamper us toward our DREAM. SOLUTION to PROBLEM and CONTINUAL IMPROVEMENT are inherent parts in that VG’s version of PDCA diagram that I made for my personal interest (see the attached picture above).

I, since long ago, have believed that it is better to focus on POSITIVE things and try to do POSITIVE Reinforcement) to ownself. Then, try to influence other people in POSITIVE term. If it turns out that in our environment, we are dealing with people who are NEGATIVE, let alone leader of the organization is a Level 3 person (NEGATIVE LEADER), then for me personally, it is better to leave that environment and work somewhere else than having to sacrifice my future.

People who think NEGATIVELY are because they DO NOT have personal principles. Stephen Covey calls them people who DO NOT have PRIVATE VICTORY (Do Not Have Confidence). 100% of people who behave NEGATIVELY are LOSERS for themselves, so that AUTOMATICALLY they will also develop other LOSERS in order for their group to consist more of fellow LOSERS (LOSER People/Community).

PDCA (Plan-Do-Check-Act) has been used officially by ISO as the framework for all management systems published by ISO (the International Organization for Standardizations). Please read PDCA association with the Risk Management System (ISO 31000: 2009) here: