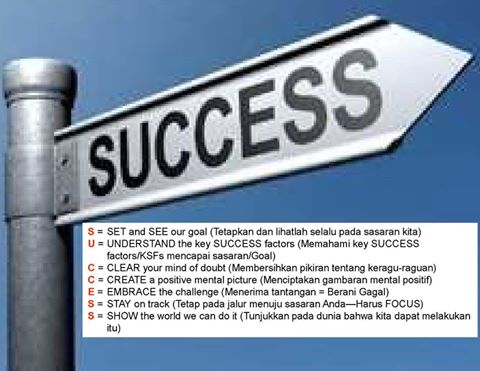 Many people often ask me about what is meant by SUCCESS? My answer is very simple, if you HAVE BEEN satisfied with your achievements or in everyday language if you have been satisfied with your current situation, then you have SUCCEEDED, Because SUCCESS = PUAS (Pastikan Usaha Anda SUCCESS) // SATISFIED (Make Sure Your Effort SUCCESSFUL). SHOULD be noted and remembered that we will NOT be possibly able to influence someone else to be more SUCCESSFUL, if he/she has been satisfied with his/her life. If we try to INTERVENE on people who had been satisfied with their lives, then we would be the one who would be FRUSTRATED and it would be WEIRD to them!

SUCCESS starts from setting GOAL and striving to achieve that GOAL. Thus, the achievement of that GOAL is SUCCESS, because for someone who HAS reached his/her GOAL, then he should be SATISFIED. The following article is NOT intended to be addressed to people who DO NOT have GOAL and those who are NOT concerned with that GOAL achievement, because they actually HAVE been content with their lives. Are such people considered SUCCESSFUL? Because the concept SUCCESS = PUAS (Pastikan Usaha Anda SUCCESS) // SATISFIED (Make Sure Your Effort SUCCESSFUL), then as long as someone HAS been satisfied with his/her life, then they HAVE been SUCCESSFUL. If so, SUCCESS DOES NOT depend on others, BUT depends on oneself and it is called CHARACTER. My previous article HAS explained the difference between CHARACTER (sourced 100% from the oneself) and REPUTATION (sourced from outside based on the judgments of others).

I learn the word SUCCESS and apply it to myself in order to be SUCCESSFUL based on the following SUCCESS acronym:

If you pay attention to the SUCCESS acronym above, it seems that if we want SUCCESS, then it MUST be started by setting and seeing our GOAL. Good GOAL setting is: SMART/ER/S, namely:

If those SMARTER GOALS and SUCCESS acronym are reassembled into PDCA Approach, it will look as follows:

Thus PDCA cycle repeats continuously as CHARACTER OF SUCCESS of a professional. SUCCESS turns out not to be GOOD LUCK, but SUCCESS through the constantly correct and consistent Design and Implementation of PDCA.

Thank you. Best Regards to SUCCESS.